Sea ice is a key habitat and source of primary productivity for marine ecosystems in Antarctica. It plays a critical role in the pelagic food web, such as supporting algal productivity that sustains krill populations. However, conventional sampling of sympagic organisms (which have a sea ice-associated life stage) requires operating on the sea ice, limiting the window for sampling to approximately 4-6 weeks during the early Austral spring. This means that practically nothing is known about the sympagic organisms during late-spring/early-summer and the Austral fall and winter. For the first time, we will be conducting underwater sampling of planktonic communities associated with the underside of sea ice, over the entire year.

Why are sympagic communities important?

The Ross Sea Region contains one of the most productive marine ecosystems in the Southern Ocean, encompassing open ocean, pack ice and coastal habitats, including the world’s largest marine protected area. Antarctic marine systems support a wide range of organisms from tiny algae and bacteria to larger animals, such as krill and silver fish, all the way to whales, the largest of all. These organisms are interconnected within a food web and rely on each other for survival.

Sympagic organisms live, for at least a part of their life, associated with sea ice. This community consists of algae and bacteria, as well as larger species (e.g. ichthyoplankton (fish), copepods, meroplankton), which are of instrumental importance to the marine food web.

Forecasting the likely future impacts of climate and environmental change on Antarctic ecosystems requires knowledge of present-day marine ecosystems. But there are major gaps in our knowledge of the temporal dynamic of sympagic communities.

Given sea ice habitats are inaccessible for much of the year, we needed an autonomous way to find out who the occupants are in sympagic habitats beneath the sea ice, year-round. Undersea view of the sympagic environment under the sea ice. Photo: Leigh Tait/NIWA

Why do we need a new type of underwater biosampler?

Our new instrument is named HAUWAI-20, which is short for High-capacity Autonomous Under Water sampler for Antarctica 2020 (Hauwai-20). But also, “Hau” indicates the vital energy that is present. “Wai” means water, and can be an act of identification, such as what is contained in the question "ko wai koe?" or "who are you?" Hauwai therefore, is to set an energy in motion whose task primarily is about identification underwater. 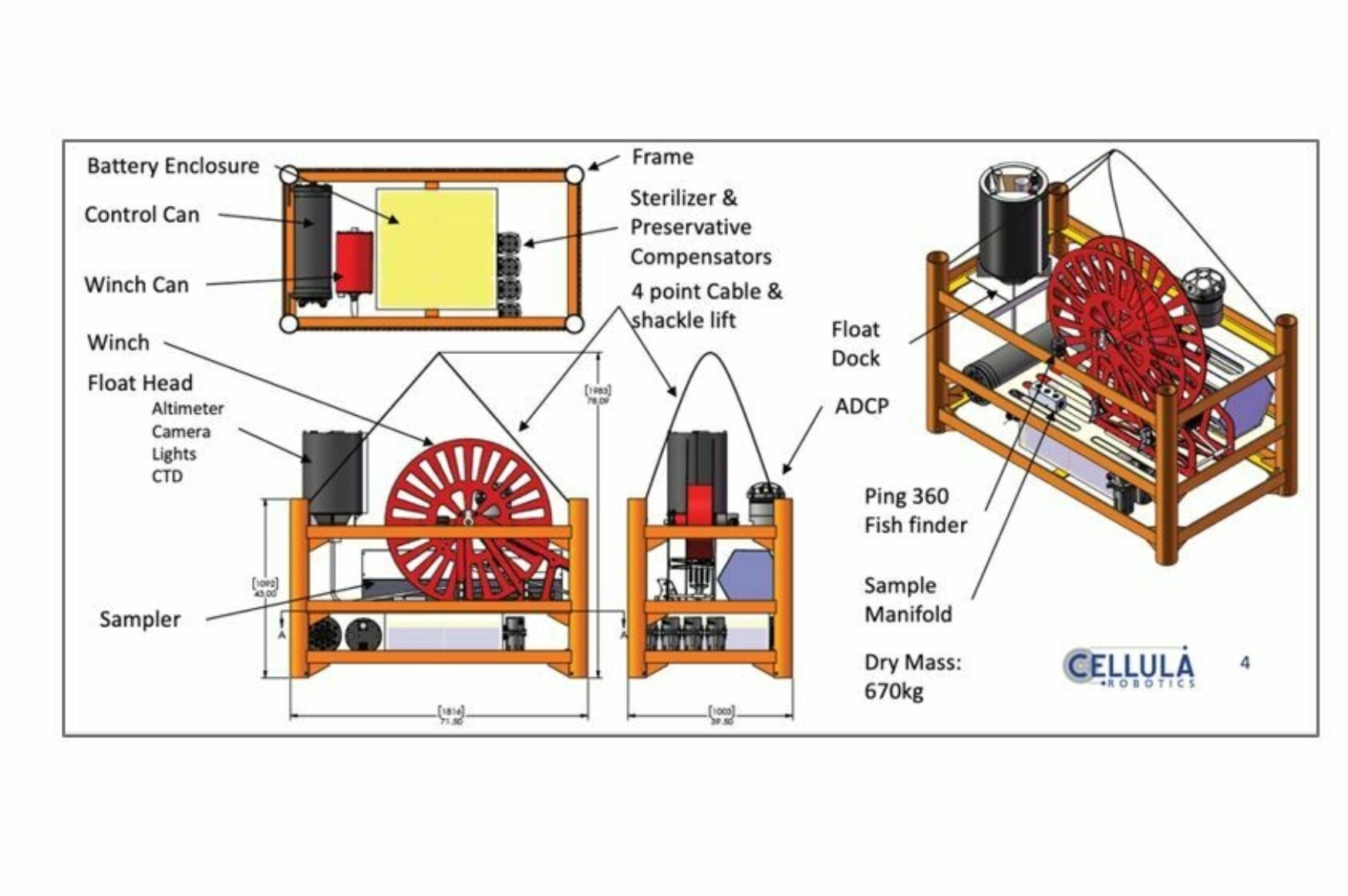 How is the new autonomous biosampler different?

Hauwai, the new underwater biosampler, can be configured to optimise the capture of sympagic organisms, and its large filter size and high flow rate will maximise sample capture. It can sample across three filter sizes at the same time and preserve up to 150 independently sealed samples, making it ideally suited for sampling marine zooplankton of diverse sizes.

It is a ‘smart’ sampler, equipped with a programmable controller and in line sensors (e.g., conductivity, temperature, depth, pigments, video camera, and ADCP (currents, ice condition, and fish finder). The built-in sensors mean it can sample when certain combinations of environmental conditions are met (or it ‘sees’ something interesting), rather than at fixed depth and time intervals.

The biosampler will be bottom moored in the ocean, under the sea ice, year-round. A winch-mounted intake umbilical with an instrumented float head on the sampler, developed by InterOcean Systems (San Diego, CA., USA), will be deployed at prescribed intervals up from the sea floor to the ice-water interface above. Known volumes of water (at 7.5 L/min) will be pumped down the umbilical to the sampler and into a stack of filters to collect a range of size classes of particulates. The filters will then be assembled within a single container (puck) and chemically preserved for identification and genetic analysis.

This biosampler, able to operate in both freshwater and seawater, will be the first instrument of its kind ever produced or custom-made for New Zealand and Antarctica. It has been developed through a long-standing collaboration between Professor Craig Cary (University of Waikato), the University of Delaware and Cellula Robotics (Vancouver, Canada), with the original prototype development funding coming from the United States National Science Foundation.

The images below show the winch assembly for the Huawai-20 underwater biosampler and an example of zooplankton collected from an Antarctic sympagic environment. Photos: Craig Cary/University of Waikato and Daryl Norval/ InterOcean Systems, San Diego, California.

Where and when will the new underwater biosampler be deployed?

The underwater biosampler will initially undergo its Antarctic sea trial in 2022 in McMurdo Sound near Scott Base, followed by multi-year deployments in the Terra Nova Bay area. While the current version is fully autonomous, we will deploy it with an ethernet and power cable from the shore, so New Zealand researchers can control the instrument, monitor conditions, sample, and “see” underwater in real time.

The biosampler will be pre-programmed to sample at weekly intervals, but will incorporate telemetered sensors to detect irradiance, chlorophyll fluorescence, temperature, and conductivity to allow sampling in response to specific events. Samples will be analysed using conventional morphological approaches by our team, as well as a high-throughput DNA-based approach, to complement Antarctic field spring-summer sampling campaigns.