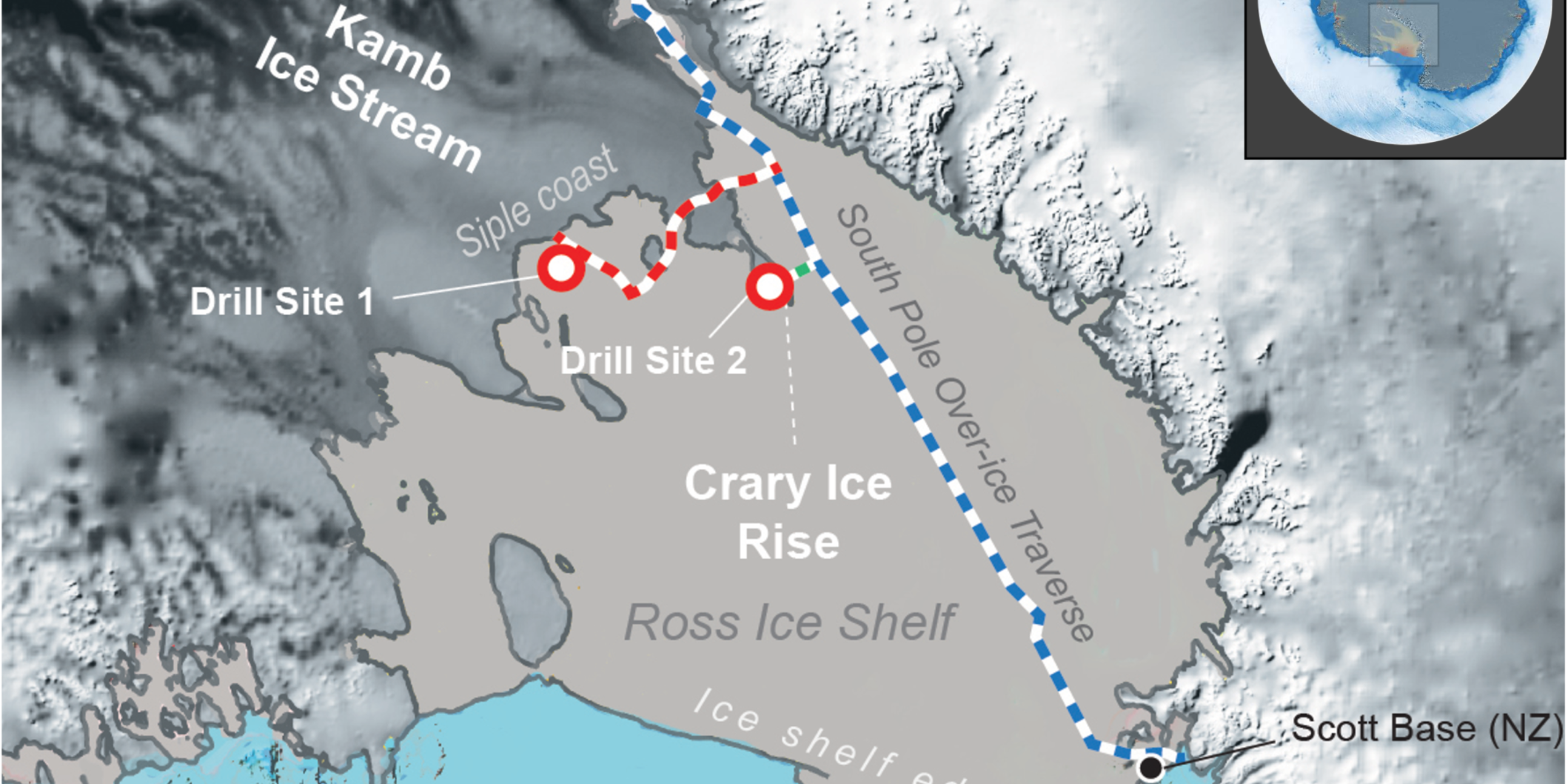 Location map of drill sites for the SWAIS-2C initiative.

The SWAIS-2C initiative goes to the heart of the strategic intent of the Antarctic Science Platform (ASP) by addressing the primary question, “is the Paris Agreement target of limiting global warming to less than 2°C a safe ‘guard rail’ for the West Antarctic Ice Sheet?” Global average temperature is already 1°C above preindustrial levels and rising. We know sea level will rise at least 30cm over the next several decades, displacing tens of millions of people living in low lying coastal areas. This cannot be avoided, however, if Antarctica’s ice shelves and the West Antarctic Ice Sheet (WAIS) collapse, global sea level will rise 4m. A modelling study published in Nature in 2015, led by ASP Principal Investigator Dr Nick Golledge, suggested 1.5-2°C of global warming could be a tipping point for collapse of the WAIS.

Evidence from Earth’s past offers a glimpse into our future. In the last interglacial period, 125,000 years ago, global temperatures were 1.5-2°C warmer than pre-industrial times, similar to what we will see if emissions targets are met. Sea level was between six to nine metres higher due to ice melt – but it’s not yet clear how much each ice sheet melted. Recent studies of the Greenland ice sheet suggest most of the meltwater came from Antarctica, but direct evidence is missing. The critical questions remain – did the West Antarctic Ice Sheet melt, and if so – how much and how fast? This requires geological evidence from the centre of West Antarctica, but records are extremely difficult to obtain, because they are costly, logistically difficult, and require innovative drilling technology.

Our engineering team has developed a new drilling system that we can transport hundreds of kilometres across the Ross Ice Shelf to the Siple Coast (see Figure 1). This is where the West Antarctic Ice Sheet first lifts off from the sea floor and begins to float (See Figure 2). We will melt a hole through the floating ice with a hot water drill and then use a purpose-built light-weight sediment coring system. These new records will inform how the West Antarctic Ice Sheet behaved in the past – and assist in testing climate and ice sheet models used to predict the future. For the first time, we will see just how sensitive West Antarctica is, to a warmer climate. We will discover whether our efforts to reduce greenhouse gas emissions can save the West Antarctic ice sheet and limit global sea level rise. 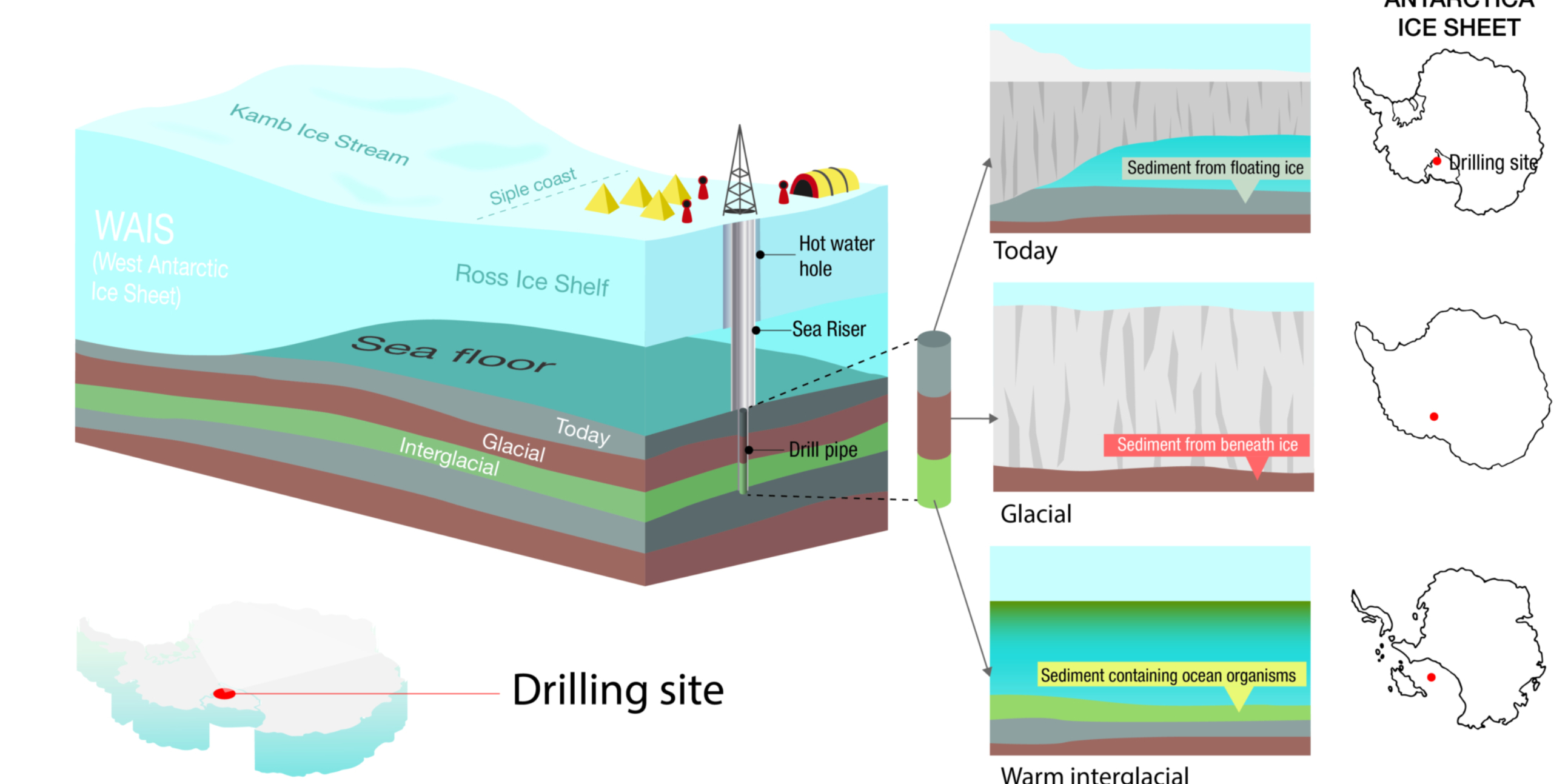 Drilling approach for the SWAIS-2C initiative.

Planning is now well underway, site surveys are complete, and deep drilling at the Kamb Ice Stream site (Figure 1) will occur in 2021/22. During the 2020/21 season, Antarctic New Zealand will traverse equipment for the drilling 1000 km across the Ross ice shelf to the Siple coast. We also aim to drill another site at the Crary Ice Rise site (Figure 1) a year after. The drilling team will be on site in Antarctica to recover sedimentary cores. These will be shipped to New Zealand where a larger team of international scientists will study the sediments to reveal the environmental secrets, currently hidden beneath the ice.

These new discoveries will be taken up by Intergovernmental Panel on Climate Change Assessment Reports, and guide the way we plan and adapt to future change in New Zealand, and evaluate mitigation pathways and implications for preventing dangerous global sea-level rise. This will be delivered through collaboration with the MBIE-funded NZSeaRise Programme; co-designed to support the Antarctic Science Platform.

This Case Study was submitted to MBIE as part of the ASP annual reporting for the 2019-2020 year.