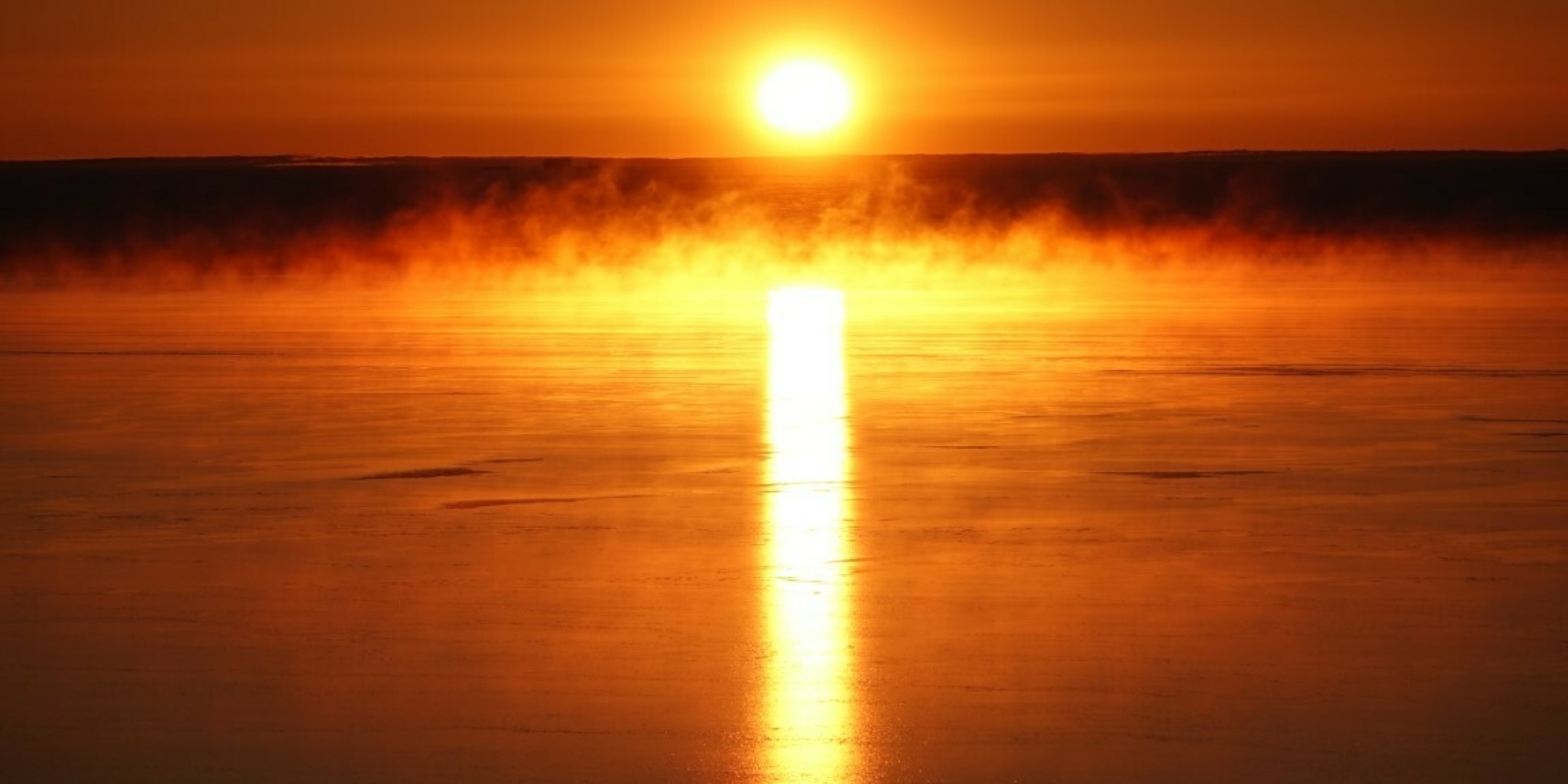 What's going on with Antarctica's weather?

One of the coldest places on Earth recently experienced a spike in temperature 40°C above normal. Should we be worried? (Spoiler alert: Yes!)

On 18 March a low pressure system extending from Tasmania drew a large plume of subtropical warm moist air poleward, over the Wilkes Land coast of Antarctica, up onto the vast and cold East Antarctic Ice Sheet (EAIS) (see Figure 1). This caused surface temperatures to rise by up to 40°C. A daily temperature change of this magnitude over EAIS is unprecedented in instrumental records, which extend back 65 years at Vostok Station.

Scientists have been referring to this extreme event as being caused by an “atmospheric river” of warm moist air funnelling from lower latitudes by cyclonic weather systems. Such a phenomenon caused unpleasantly humid conditions over the North Island in early January, when a corridor of warm moist air flowed southeast out of equatorial Pacific Ocean directed by blocking highs. 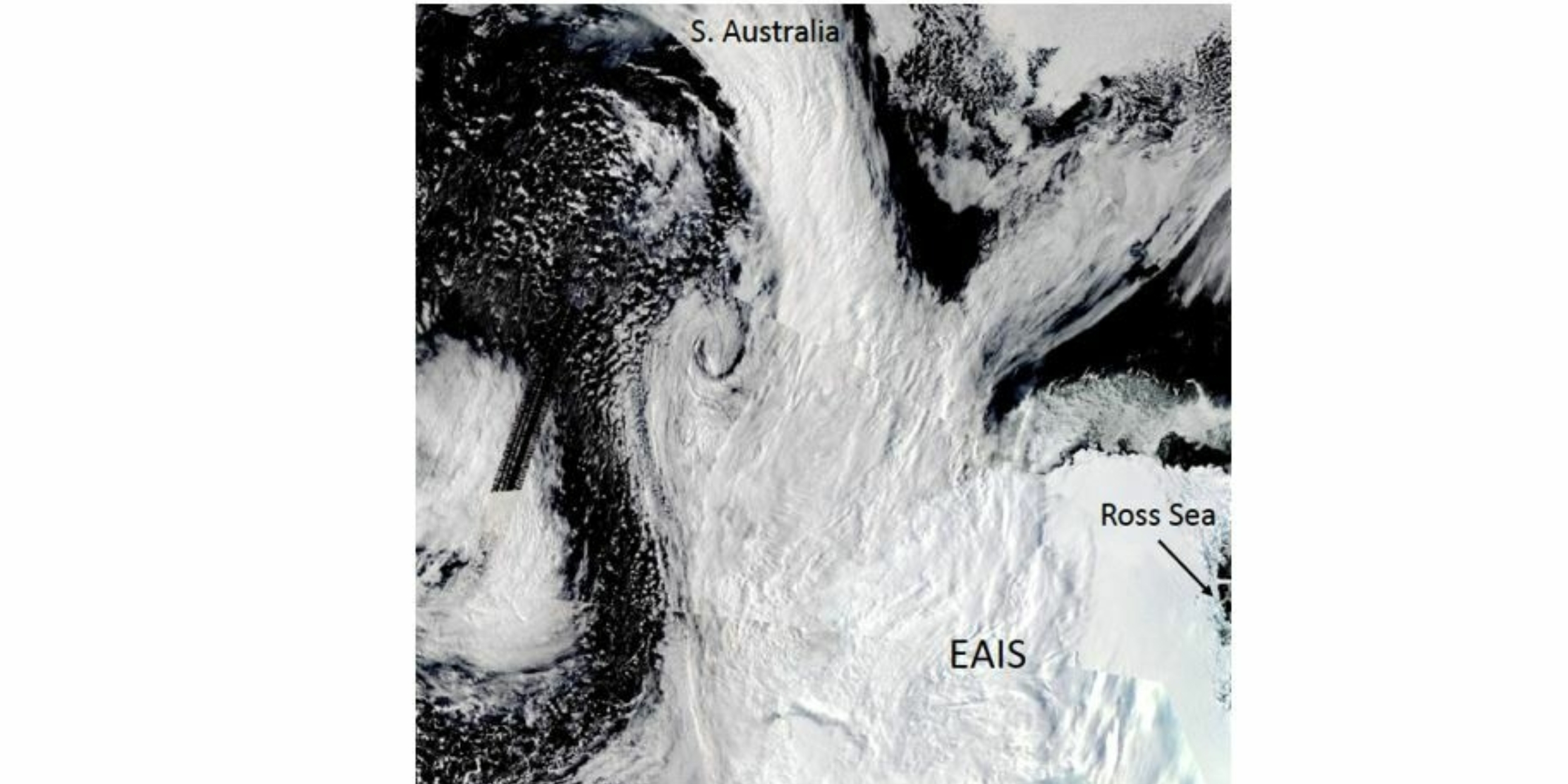 Figure 1: A satellite picture from 18 March, showing a big band of cloud marking an “atmospheric river” running from the Australian region to the East Antarctic. You can make out the coast of eastern Victoria Land in the centre-left. That flow of air is just east of a deep low, the spiral pattern near the centre of the image. The image was posted on Twitter by Jonathan Wille: https://twitter.com/JonathanWi...

To put the Antarctic heat wave in context, Concordia Dome, close to where the centre of the heatwave occurred (Figure 2), is 3000m above sea-level and one of the coldest places on Earth. It is usually -60 to -50°C at this time of year, so even with this 40°C temperature anomaly it remained frozen (-11.8 C, Figure 3). However, around the coast from Australia's Casey Station to New Zealand's Scott Base in the Ross Sea temperatures soared up to 10°C warmer than usual, with an enormous amount of snow falling on coastal glaciers.

The 'heat wave' was the final straw for the Conger Ice Shelf, about the size of greater Auckland, which disintegrated on 21 March (Figure 4). Located on the coast below Concordia Dome next to the Shackleton Glacier, the ice shelf had been thinning due to ocean driven melt over the last decade or more. 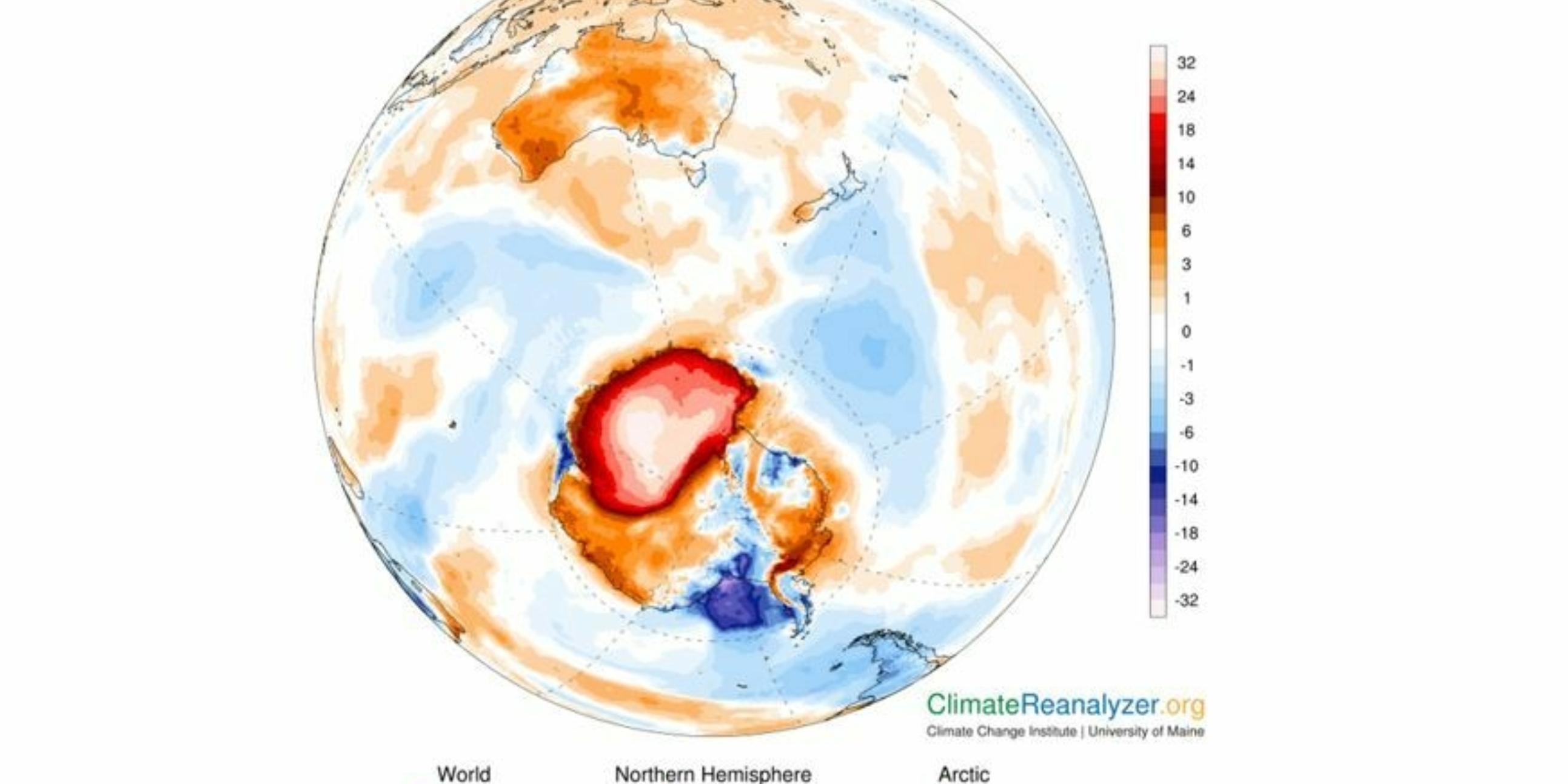 Figure 2: From 'Climate Reanalyzer' web site at the University of Maine showing the 18 March temperature differences from normal (“anomalies”) over southern latitudes. It shows the huge extent of very large temperature anomalies over the East Antarctic, which are off the scale. Taken from https://climatereanalyzer.org/wx/DailySummary/#t2anom on 18 March. 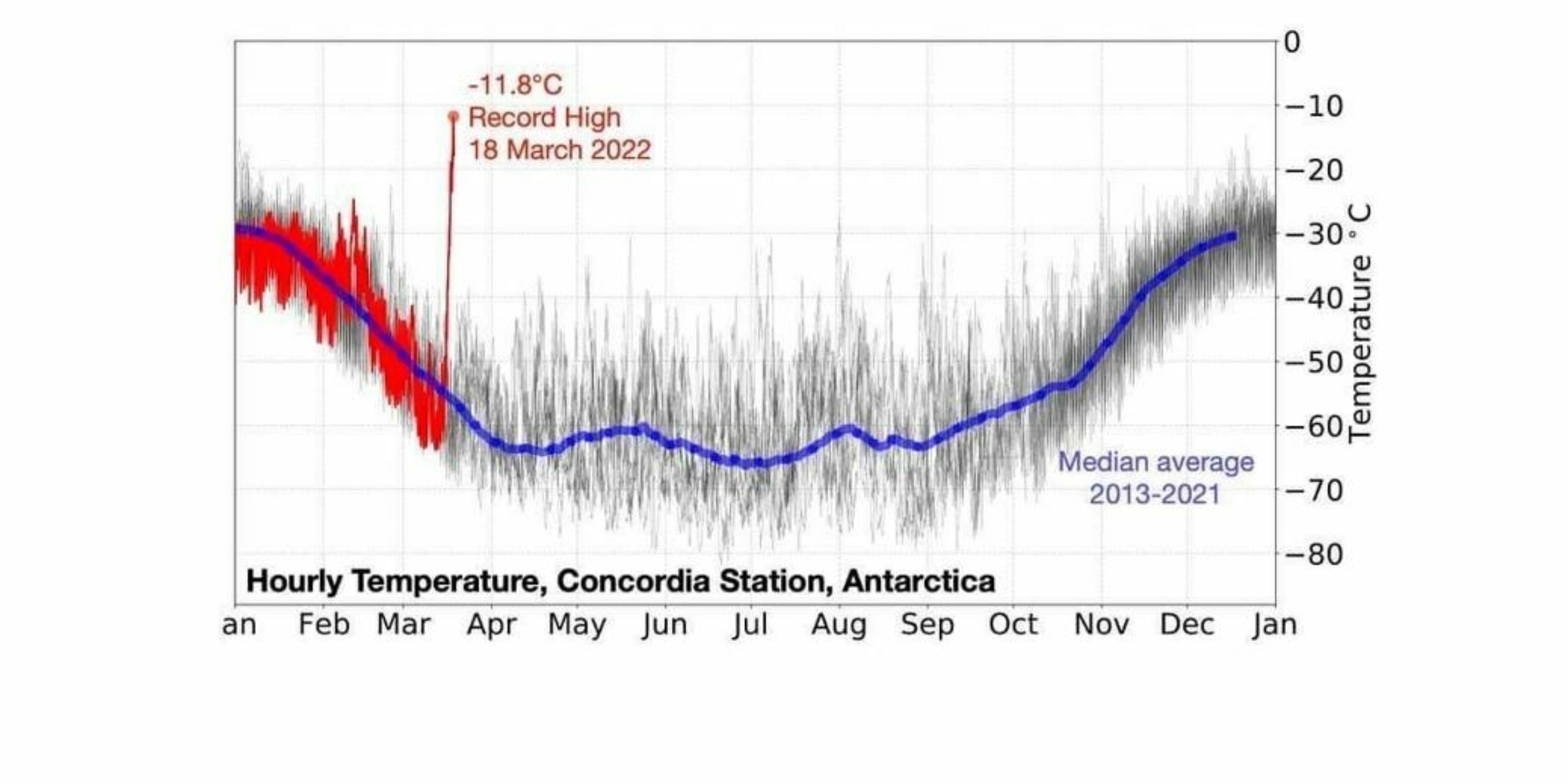 Figure 3: Hourly temperatures from Concordia Station, over 3000 metres above sea level on the top of the East Antarctic plateau. On 18 March, temperatures there were around 40°C above average. The image was posted on Twitter by Eric Lagadec: https://twitter.com/EricLagade...

Is global warming to blame?

Most climate scientists around the world agree that it is difficult to attribute a single event to global warming. But the climate has already warmed over 1°C globally, and the weather and climate are now different every day, as noted by our own expert on Antarctic climate at Te Herenga Waka—Victoria University of Wellington, Dr Kyle Clem. Hence, extreme events (e.g. floods, heat waves, wild fires) occurring in other parts of the world with increasing in frequency are attributed to global warming, and scientists expect to see more of these Antarctic heat waves as the global climate continues to warm. So we can say that global warming is implicated, but it is not solely to blame. It’s the combination of natural variability with the warming climate that gives us the biggest extremes.

Should we be concerned?

Yes! Such an outstanding extreme temperature over the coldest place on earth is a very worrying occurrence. However, Antarctic climate is very noisy so it is hard to see clear trends of global warming there. While there has been significant regional warming, for example in the Antarctic Peninsula, the emergence of a continent-wide warming trend above what can be explained by natural variability has been difficult to identify. The deep and well-mixed Southern Ocean heat sink, combined with the ongoing cooling influence of the ozone hole, isolates Antarctica from global warming. Because of this, until very recently there has been no discernible decrease in the extent of sea-ice around Antarctica. This is in contrast to the Arctic, which is warming at three times the rate of the global average due to powerful feedbacks associated with the dramatic loss of sea-ice.

That said, climate models driven by global warming scenarios show the emergence of human induced warming over Antarctica within the 21st century (and certainly by the 22nd century) as atmospheric greenhouse gases continue to rise. This warming and the predicted reduction of sea-ice extent plays two key roles. They provide a powerful albedo feedback that heats the surface ocean (loss of Sun's reflectivity), while also enabling warm deep water to upwell and melt the periphery of the Antarctic ice sheet which sits in the ocean. This in turn may initiate some irreversible processes, such as ice shelf collapse, marine ice cliff instabilities, and the unstoppable retreat of large parts of the ice sheet into deep basins below sea-level. If they happen, these processes will cause rapid sea-level rise. This is why the recent Intergovernmental Panel on Climate Change, 6th Assessment Report said that "global sea-level rise of up to 2m above present could not be ruled out by the end of the century".

This is the biggest question. This summer has seen a record heatwave combined with a record decrease in summer sea-ice extent. At the moment the Antarctic ice sheet is losing mass due to ocean warming concentrated in the Amundsen Sea region of west Antarctica, where the Pine Island and Thwaites ('doomsday') glaciers are thinning dramatically and may be experiencing irreversible collapse. But unlike Greenland, the Antarctic ice sheet is not losing significant mass from surface melting, because it is too cold. This is especially the case for east Antarctica.

For ice sheets to melt down from the top they require positive degree days at the surface, that is temperatures above freezing. If future Antarctic heatwaves increase in frequency and penetrate into West Antarctica, which has a significantly warmer background climate, then we could see increased surface melting and freshwater run off into the ocean. The loss of summer sea-ice and the development of a freshwater layer on the surface of the Southern Ocean will increase the transport of warm circum-polar deep water and accelerate the melting of ice shelves and the vulnerable margins of the Antarctic ice sheets that sit below sea-level. This is when the rapid unstoppable processes of ice sheet collapse, discussed above, could become widespread. 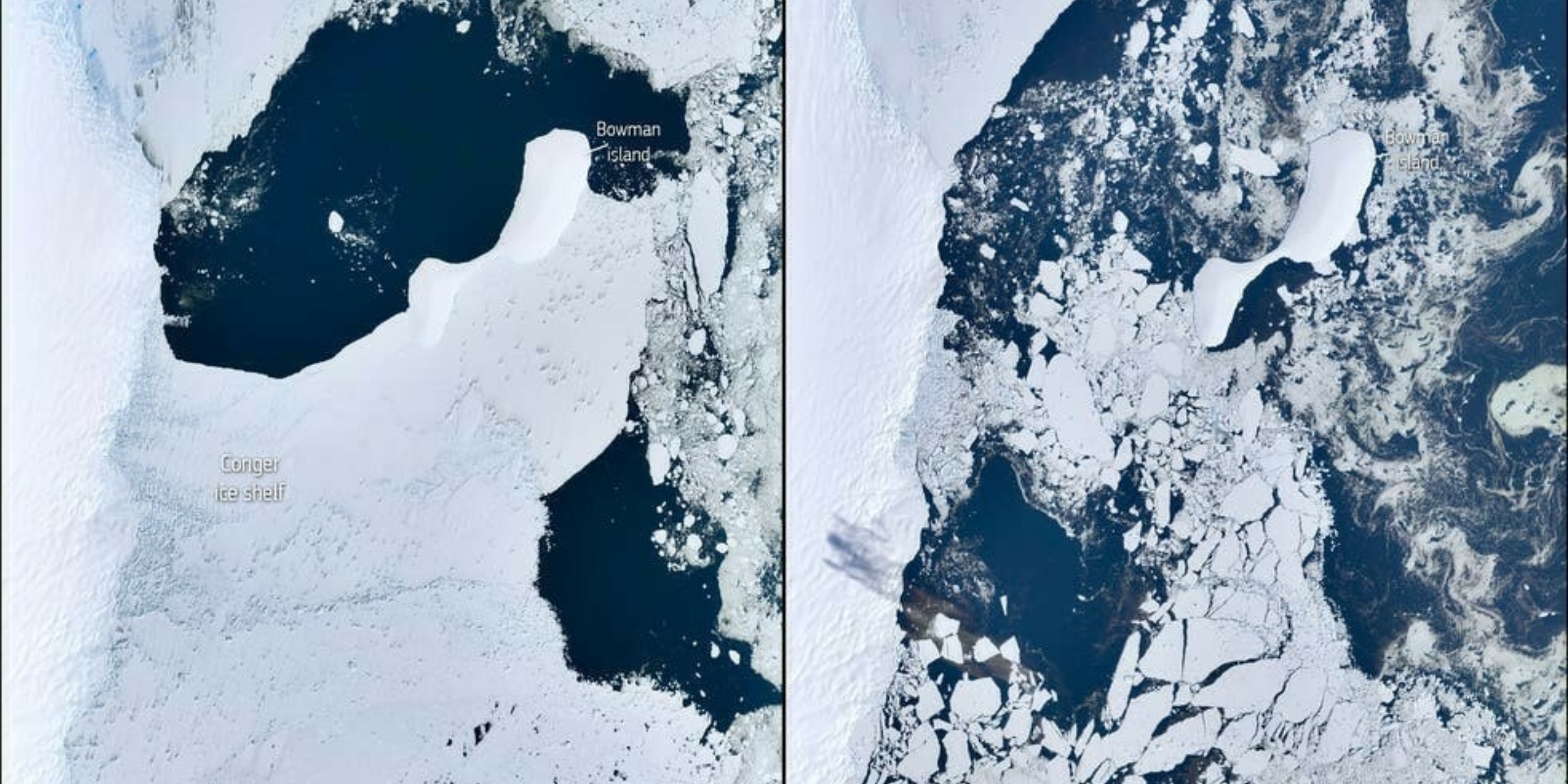 Figure 4: A time series of satellite photos of the Conger Ice Shelf on East Antarctica, which collapsed and broke up into series of large ice bergs 3 days after the beginning of the heat wave. Image from the Copernicus Earth Observation Programme: https://www.copernicus.eu/en/m...