Home › Updates › Drilling into Antarctica’s past to see our future 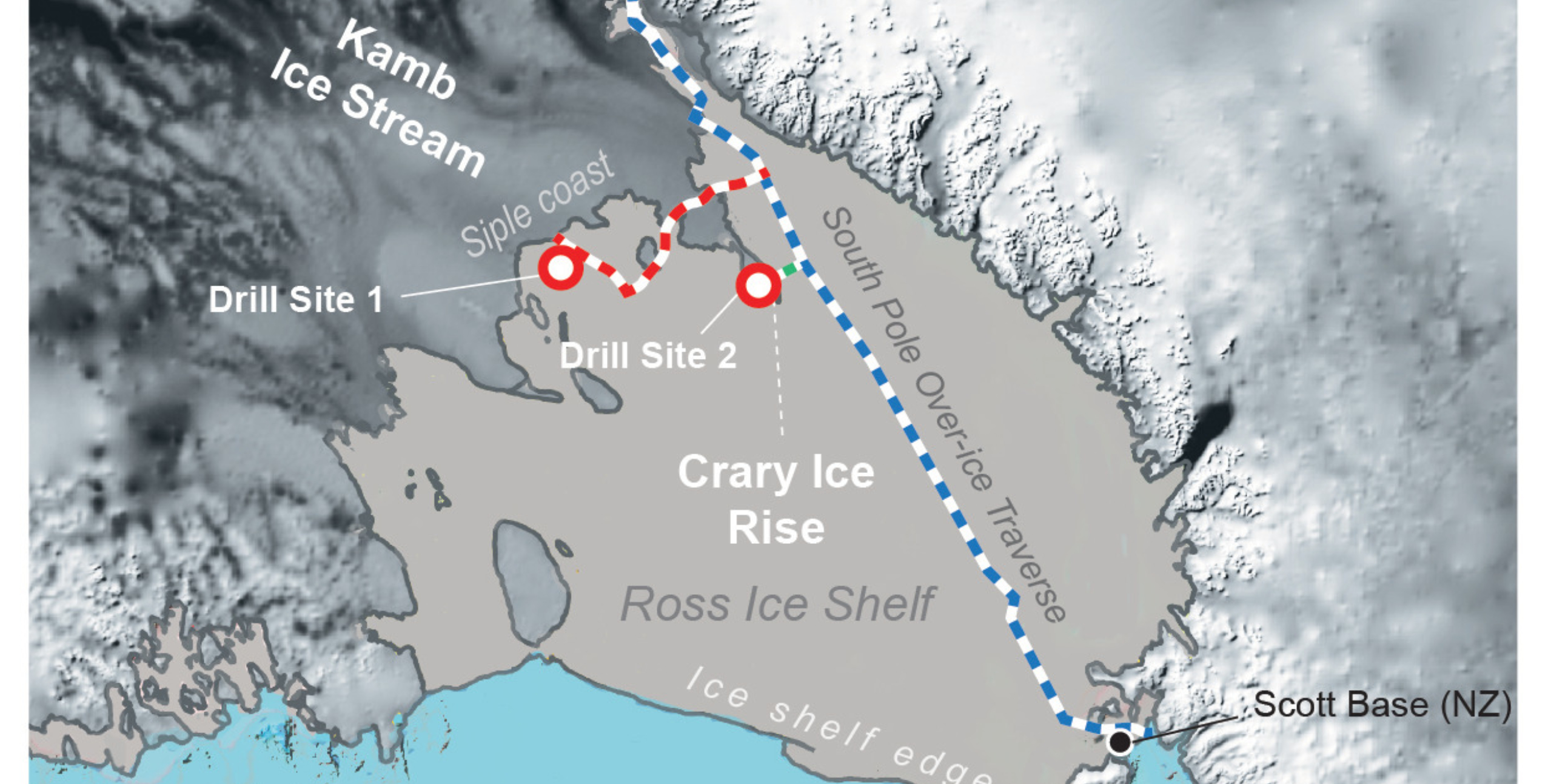 Drilling into Antarctica’s past to see our future

While COP26 today focuses on science and innovation’s role in combating climate change, Antarctic researchers are preparing to drill into the ocean floor below the Ross Ice Shelf to discover if cutting greenhouse gas emissions avoids catastrophic melt of the icy continent.

The Antarctic research project will investigate the sensitivity of the West Antarctic Ice Sheet to global warming of 2°C (SWAIS 2C) by retrieving sediment from the depths in a bid to find out how the ice behaved when global temperatures were as warm as those expected in the coming decades.

These geological records could reveal if there is a tipping point in our climate system when large amounts of land-based ice melts, causing oceans to rise many metres—if it has happened before, it could happen again.

It is an international effort supported by USD$4.6 million in funds from New Zealand, the United States, Germany, Australia, the United Kingdom and the Republic of Korea, with several other nations planning to join.

The International Continental Scientific Drilling Programme awarded the project a USD$1.2 million grant, the first for an Antarctic drilling programme.

“We have formed a team of drillers, engineers, field experts and scientists who are up to the task. Discoveries will show us how much the West Antarctic Ice Sheet could melt if we miss Paris Agreement targets,” Dr Levy says.

Dr Patterson says geological data provides direct evidence on the extent of the ice during a given time period. “This information is necessary to assess whether climate models are able to capture observed variability during warmer times in Earth’s history prior to making any assumptions about the future.”

1200 kilometres across the Ross Ice Shelf, 1 kilometre down through ice and dirt

SWAIS 2C’s preparation team will depart from Scott Base this month for a 1200km traverse across the Ross Ice Shelf to the Siple Coast, where land ice meets the ocean and starts to float. Once the drilling camp has been established, the wider science team will join the group and work through Antarctica’s ‘summer’ until February. SWAIS 2C field campaigns are planned for the next three years.

No one has ever drilled into the Antarctic seabed at a location so far from a major base, or so close to the centre of the West Antarctic Ice Sheet.

Engineers at Victoria University of Wellington’s Antarctic Research Centre have spent four years developing ‘world-first’ technology capable of hot water drilling through 800m of ice before taking sediment samples from up to 200m beneath the ice sheet.

The Centre’s Director, Associate Professor Rob McKay, says it is a massively ambitious undertaking, but New Zealand is a recognised world-leader in designing and building such innovative technology.

“The fact that so many countries are joining us in this effort highlights the urgency to understand more about the West Antarctic Ice Sheet, which remains the largest uncertainty for sea level rise projections.”

Sediments could help us understand how much Antarctic ice melted when the world’s climate was warmer. This knowledge will help scientists predict what might happen in the future if global temperatures continue on their current trajectory towards 2.7°C above pre-industrial levels.

This is important to know because Antarctic ice melt raises sea levels around the globe. The West Antarctic Ice Sheet is considered vulnerable to climate change because much of the ice, which rests on bedrock thousands of metres below the sea level, is exposed to the warming Southern Ocean.

Antarctic Science PlatformProgramme Leader, Professor Tim Naish of Te Herenga Waka—Victoria University of Wellington, says the project will address one of the biggest questions concerning climate scientists, and humanity: “Did the West Antarctic Ice Sheet collapse the last time the Earth warmed? Can we save the Antarctic Ice Sheet if nations meet the Paris Agreement targets?”

“International recognition and support for the SWAIS 2C project highlights New Zealand’s world leadership in scientific drilling in Antarctica. The climate records retrieved in this project will be critical to a much better understanding of how Antarctica will respond to a warming planet,” he says.

In 2018 MBIE contracted Antarctica New Zealand to host the Antarctic Science Platform. The Platform aims to conduct excellent science to understand Antarctica’s impact on the global earth system. The investment of $49 million over seven years is through the Strategic Science Investment Fund.

Want to take a deep dive?