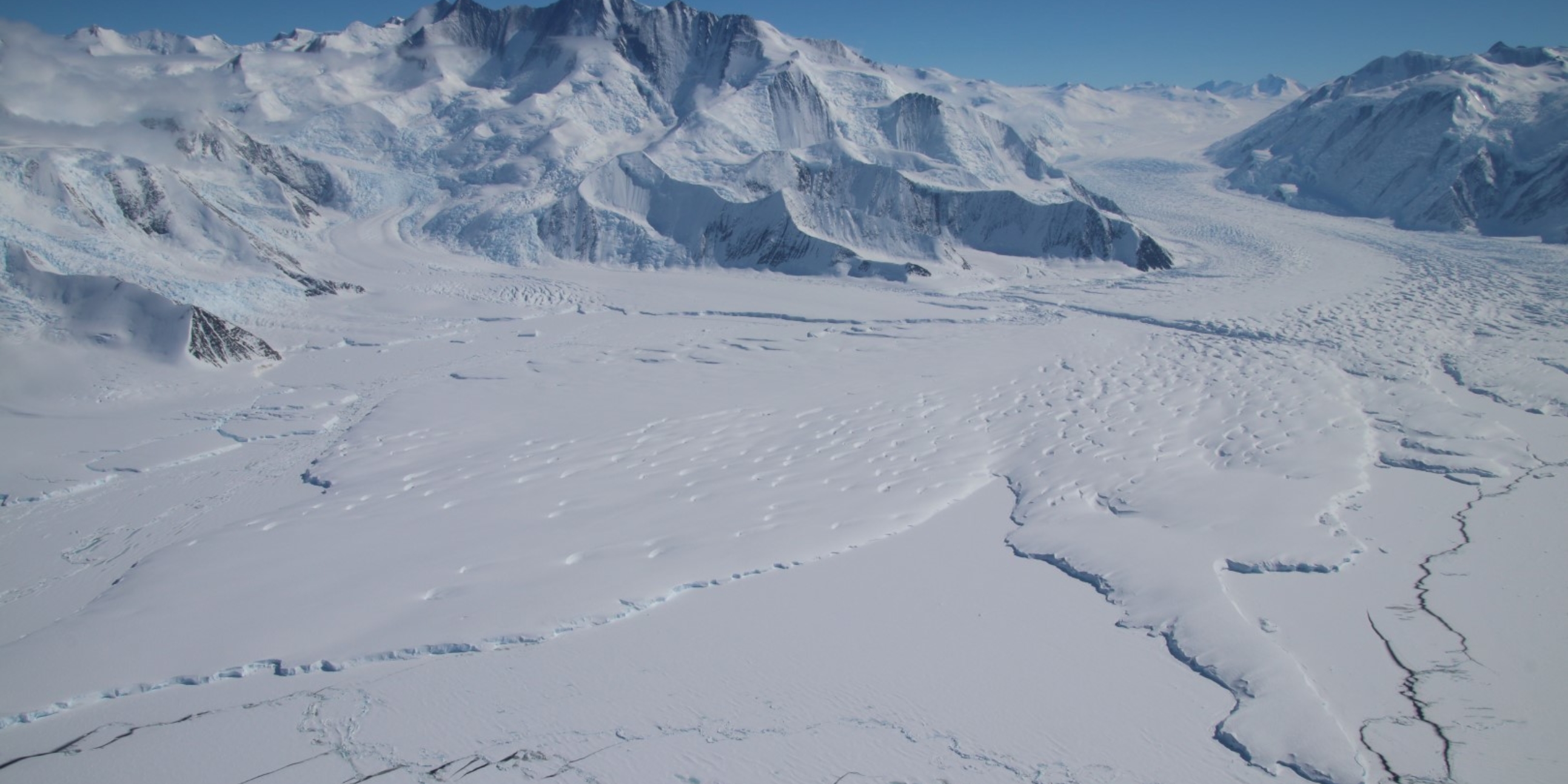 In preparation for COP26, we provide a succinct summary of the key findings and their relevance from the Intergovernmental Panel on Climate Change (IPCC) recently released Sixth Assessment Report (AR6).

Earth’s climate system is changing at a speed and scale unprecedented in many thousands of years. The recently released Sixth Assessment Report by Working Group 1 of the IPCC brings together evidence on the physical science basis for climate change, and contains stark warnings about our future unless global greenhouse gas emissions are sharply reduced.

Since the release of the previous assessment report in 2013, evidence has strengthened for humanity’s impact on the climate system and there is greater certainty and increased urgency about future impacts. The Report provides improved capability for attributing human influence on specific extreme weather events such as heatwaves, heavy precipitation, droughts, and tropical cyclones. A new interactive atlas allows climate observations and projections to be explored across a range of variables.

Climate change is already affecting every inhabited region across the globe, with human influence contributing to many observed changes in weather and climate extremes. Among the key conclusions of the report:

- Warming of 1.5°C and 2°C will be exceeded during the 21st century unless there are immediate, rapid and large-scale reductions in CO2 and other greenhouse gas emissions

- Many changes due to past and future greenhouse gas emissions are irreversible for centuries to millennia, especially changes in the ocean, ice sheets and global sea level.

- Relative sea level rise contributes to increases in frequency and severity of coastal flooding and erosion. Extreme sea level events that occurred once per century in the recent past are projected to occur at least annually at more than half of all tide gauge locations by 2100.

- Under scenarios with increasing CO2 emissions, ocean and land carbon sinks are projected to be less effective at slowing the accumulation of CO2 in the atmosphere, meaning global warming could increase even more rapidly.

- We can only release up to 900 gigatonnes of additional CO2 to the atmosphere in order to have an 83% chance of stabilising global warming below 2°C. At the current rate of emissions (50 gigatonnes of CO2 equivalent, per year), this will happen by 2040. 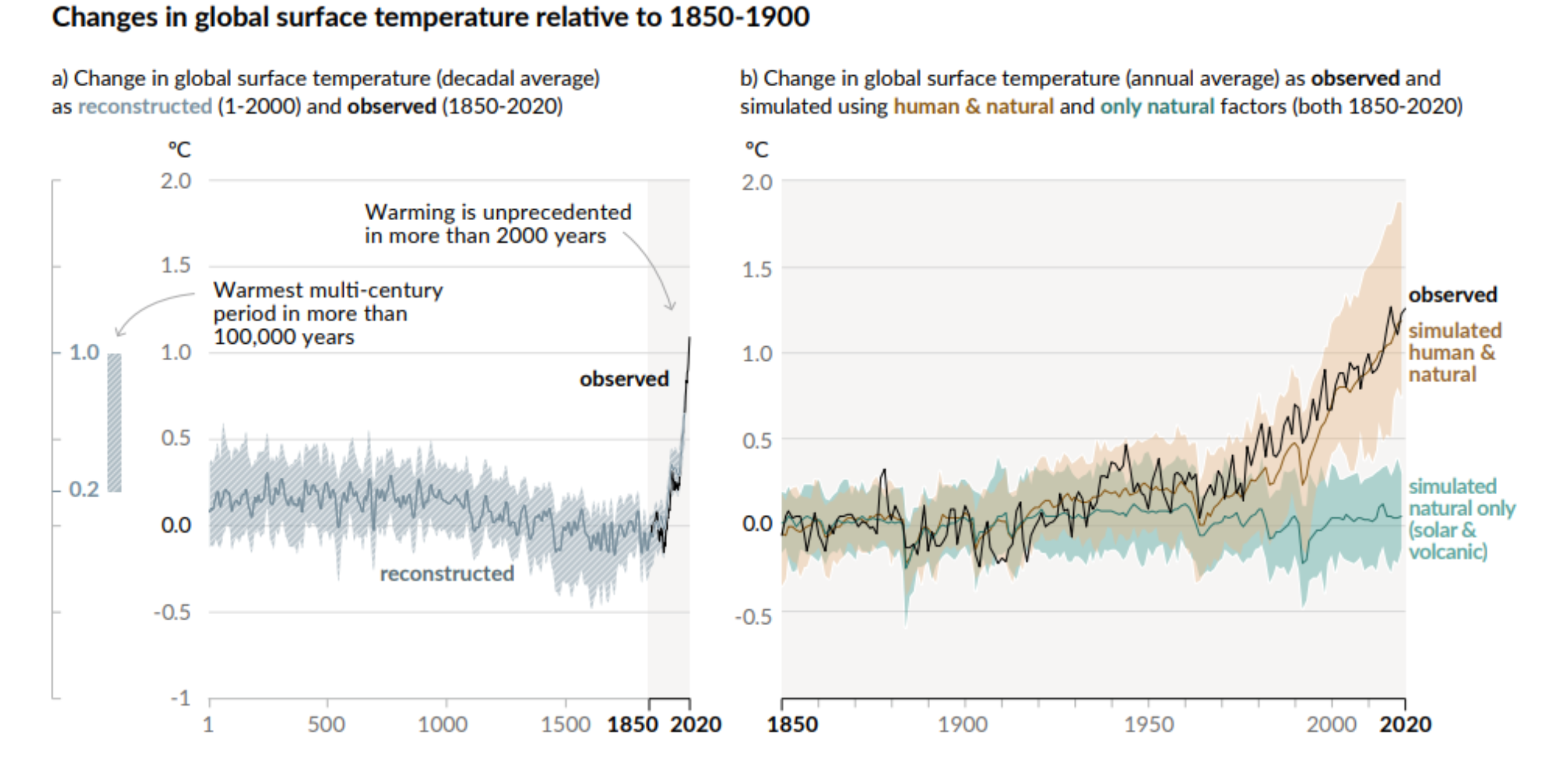 Relevance of Antarctica to Future Projections

The Antarctic region plays a key role in the Earth’s climate system, and Antarctica is central to our understanding of climate change and in modelling future scenarios. Antarctic Science Platform researchers James Renwick (Co-PI of Project 4: Sea Ice and Carbon Cycle Feedbacks) and Nick Golledge (Co-chair Future Projections Expert Group) were authors of chapters in the report and their own research and that of the wider Antarctic Science Platform community made important contributions. The work of many other New Zealand researchers fed into the report through initiatives such as the Deep South National Science Challenge, NZ Searise, Antarctic Drilling Project (ANDRILL), and Roosevelt Island Climate Evolution Project.

The scale of human impacts on the climate is underscored by the report’s conclusion that atmospheric CO2concentrations are now higher than at any time in at least 2 million years. Much of the evidence for this comes from Antarctic geological and ice core research. Other key findings from Antarctic research:

- Sea level is rising faster than at any point in at least the last 3000 years.

- Melting ice sheets and glaciers are the dominant contributors to sea-level rise, and the rate of ice sheet loss increased fourfold between 1992–1999 and 2010–2019.

- Even with reduced emissions, we are likely to see 50cm of sea-level rise by 2100; over 1 m with higher emissions levels.

- Antarctic instability is still the big wild card with the potential to cause very high (multi-meter) sea level rise increases. The IPCC considers this a low probability but due to its potentially catastrophic impact a priority for scientific advancement.

- A shift in Southern Ocean-driven precipitation patterns is likely, though in the short term this is offset by the recovery of the ozone layer.

Future changes in climate are directly linked to what happens in Antarctica, and ongoing research will reduce the uncertainty in what we are likely to see in the coming decades. Improved understanding of ice sheet melting will allow greater confidence in projections for sea-level rise under different emissions pathways. This includes the potential for passing tipping points which would commit us to rapid and irreversible sea-level rise. The uncertainty surrounding how fast Antarctica could melt led to a striking statement in the Report – that global sea-level rise of up to 2 m by 2100 cannot not be ruled out.

Antarctic Science Platform glaciologists and ice sheet modellers, together with international colleagues, are at the cutting of edge of understanding the key processes that affect the speed of sea-level rise and how to build these into the next generation of predictive models. Such evidence is critically needed by decision makers, both globally and in New Zealand, who are charged with anticipating and managing the impacts of sea-level rise. New Zealand’s climate is also affected to a large degree by the Southern Ocean (which is warming at twice the rate of the global ocean), and research on changes in atmospheric and oceanic pattens as the climate warms will help prepare us for likely impacts. 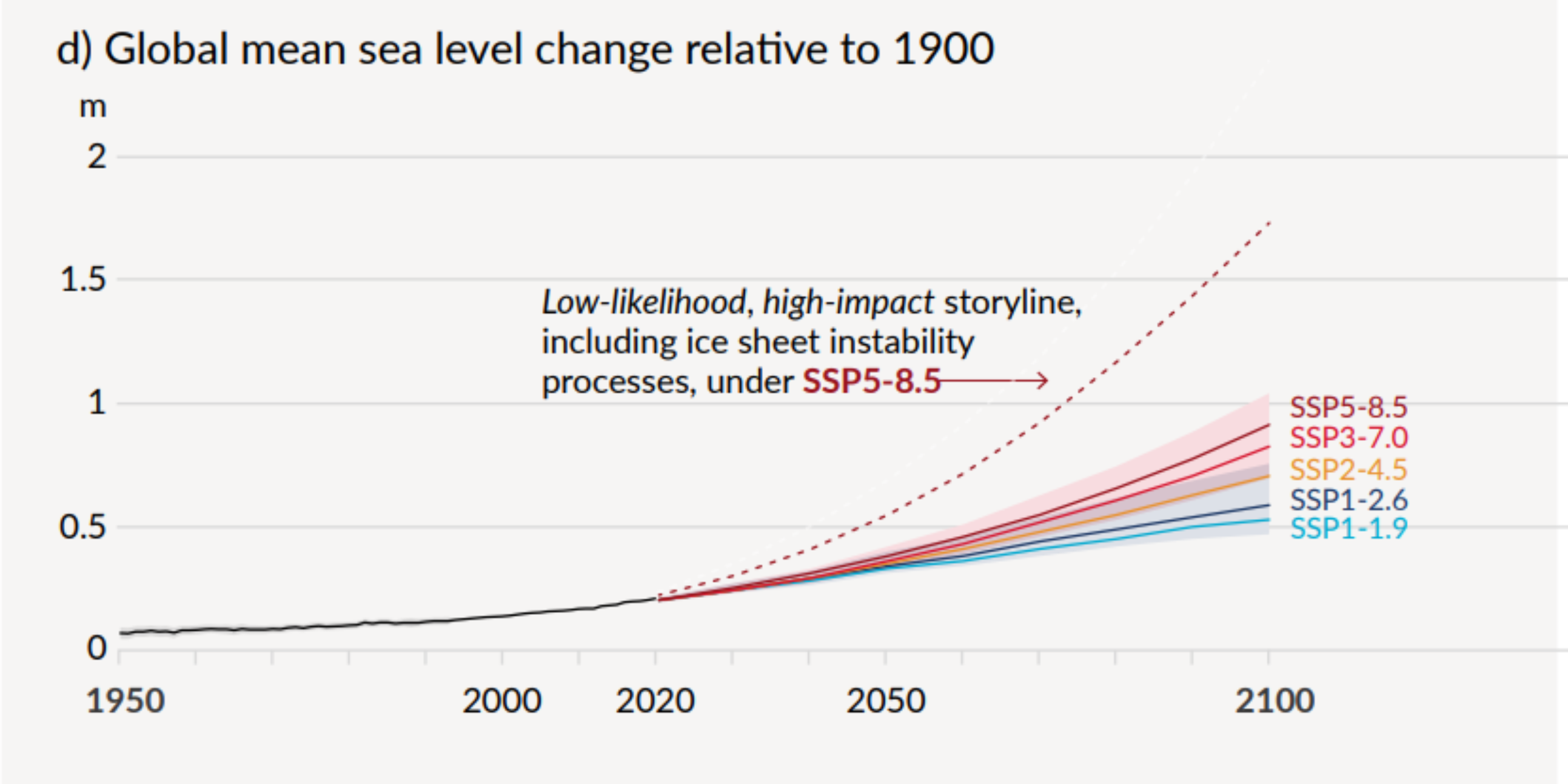 The Report sets out scenarios based on different emissions pathways. Some changes to Earth’s climate system are irreversible on time scales of centuries to millennia. Sea levels, for instance, will continue to rise for hundreds of years, although the rate of increase depends on emissions levels. Other changes to the climate could be stopped or slowed with deep and immediate reductions in greenhouse gas emissions. While the report finds that global surface temperature will continue to increase until at least the mid-century under all emissions scenarios, this can be stabilised and reduced if we take aggressive mitigation action.

The wide range of outcomes under different emissions scenarios, and the sensitivity of Antarctica to small changes in temperature, shows the influence that we have on the Earth’s future. The upcoming COP26 UN Climate Change Conference will be critical in determining which pathway we follow, in order to keep warming under the 1.5 degree threshold and avoid tipping points which lock in disastrous and unstoppable changes for centuries to come. The report from the New Zealand Climate Change Commission found that New Zealand’s current climate policies are insufficient to meet our responsibilities under the Paris Agreement to limit global warming to 1.5 degrees. The time for action is quickly running out, and bold targets and strong commitments to urgently reduce emissions are necessary. The choices we make today will have long-lasting consequences. 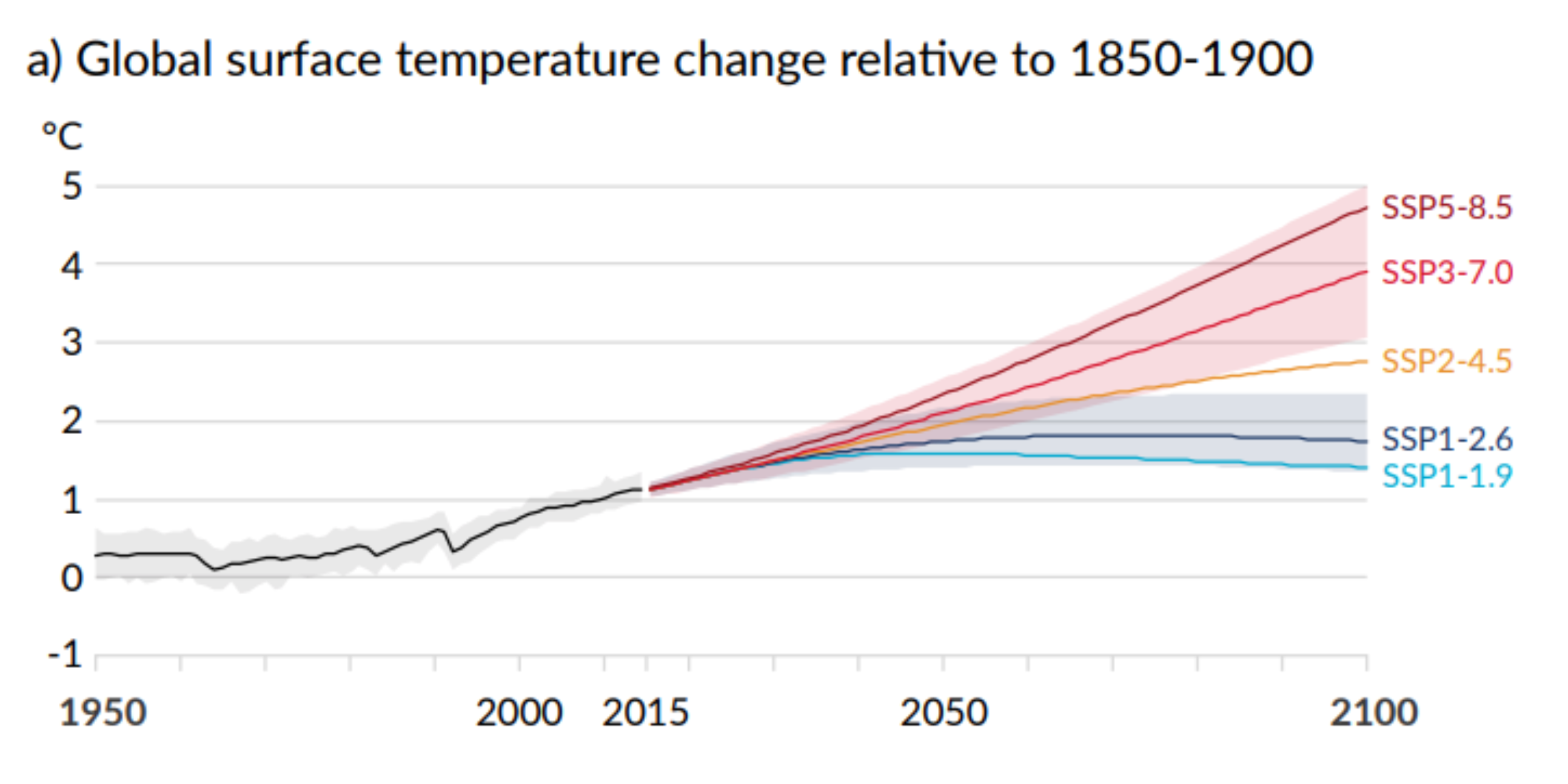