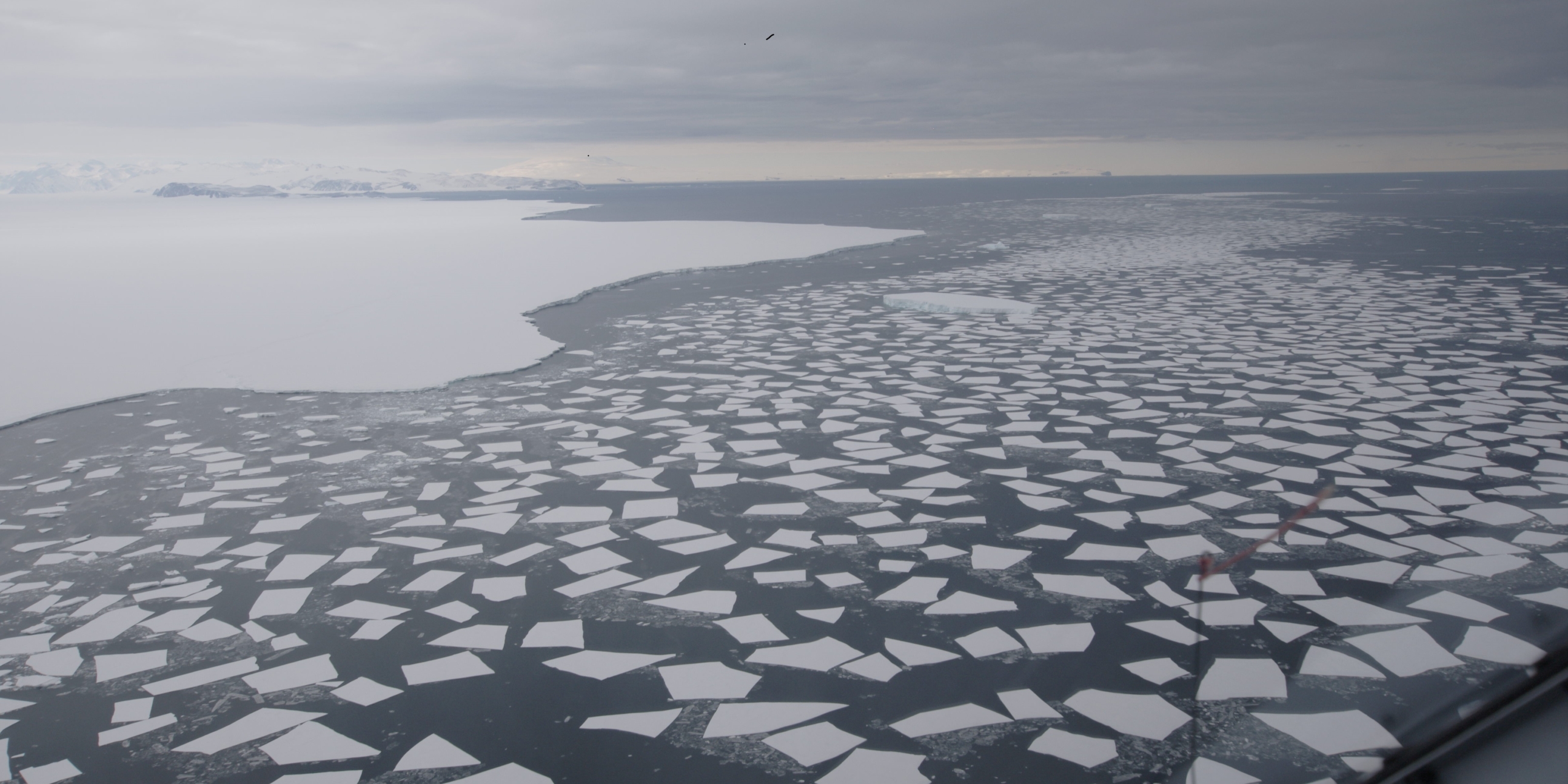 Climate change will be a major policy challenge over the coming decades. New Zealand society will be faced with major changes as we work to reduce our greenhouse gas emissions, and adapt to the changes that are already inevitable. At the end of January New Zealand’s independent Climate Change Commission released, for public consultation, its draft advice to Government on actions that need to be taken for Aotearoa to address climate change and reduce its greenhouse gas emissions.

New Zealand’s climate future is closely tied to the Southern Ocean and Antarctica. What happens in these regions has a huge influence on our climate and sea levels. As the Commission’s report sets out, there are a variety of different pathways we could take as we work to reduce emissions. Society’s responses to climate change are in an always-evolving dynamic interaction with weather, climate and ocean processes. Which pathways we take in response to the climate threat will impact what our future will look like and how we need to prepare. Understanding and monitoring the ongoing changes in oceans, ice and atmosphere is therefore a vital part of our climate response.

In releasing its draft report, the Commission has been clear that current policy is insufficient to adequately address climate change and meet New Zealand’s target of net zero emissions by 2050. (The advisory package was released for public consultation during February and March and the Commission is currently reviewing the feedback it received.) Its review found that the first Nationally Determined Contribution (NDC) for Aotearoa is inconsistent with the country’s responsibilities under the Paris Agreement to contribute to global efforts to limit warming to 1.5°C above pre-industrial levels.

The Commission acknowledged that the package of proposed actions needed to be both ambitious and realistic. Accordingly, it put forward a set of “technically achievable, economically affordable and socially acceptable paths for Aotearoa to take”. Actions that the Commission has identified as being critical to meeting the net zero target include: incentivising the use of electric vehicles, increasing total renewable energy, reducing biogenic agricultural emissions through better farming practices and establishing permanent native forests.

How the Southern Ocean Affects our Climate

The commission’s report is focused on the changes needed to reduce our emissions and move to a low-carbon society. Understanding the impact of current and future greenhouse gas emissions on Antarctica will be key to this transition.

What happens in Antarctica and the Southern Ocean influences weather, climate and ocean processes around New Zealand as well as the rest of the world. The Southern Ocean connects the Pacific, Atlantic and Indian Oceans. During winter months sea ice forms around Antarctica almost doubling the size of the continent. As the sea freezes salt is expelled increasing the salinity of underlying waters, and this cold, salty and hence dense water sinks to the ocean floor. It then flows out over the shelf break, beneath upwelling and relatively warmer waters and forms the currents that drive the global ocean circulation system including the ocean systems around New Zealand. The strength and temperature of these currents has a large effect on New Zealand’s climate.

Atmospheric circulation patterns in the southern hemisphere also affect New Zealand’s weather. Atmospheric patterns are heavily influenced by the Southern Annular Mode (SAM) or the Antarctic Oscillation. The SAM involves alternating windiness and storm activity between mid-latitudes of the Southern Hemisphere (where New Zealand sits) and the higher latitudes around Antarctica. SAM accounts for about 25% of the climatic variability seen in the southern hemisphere.

But things are changing as a result of humanity’s continuing emissions of greenhouse gases. In the past 50 years, SAM has shifted to a more “positive” phase, where stronger winds are drawn closer to Antarctica. This phase shift has resulted in stronger westerly winds over the Southern Ocean, but is associated with hotter weather in New Zealand. 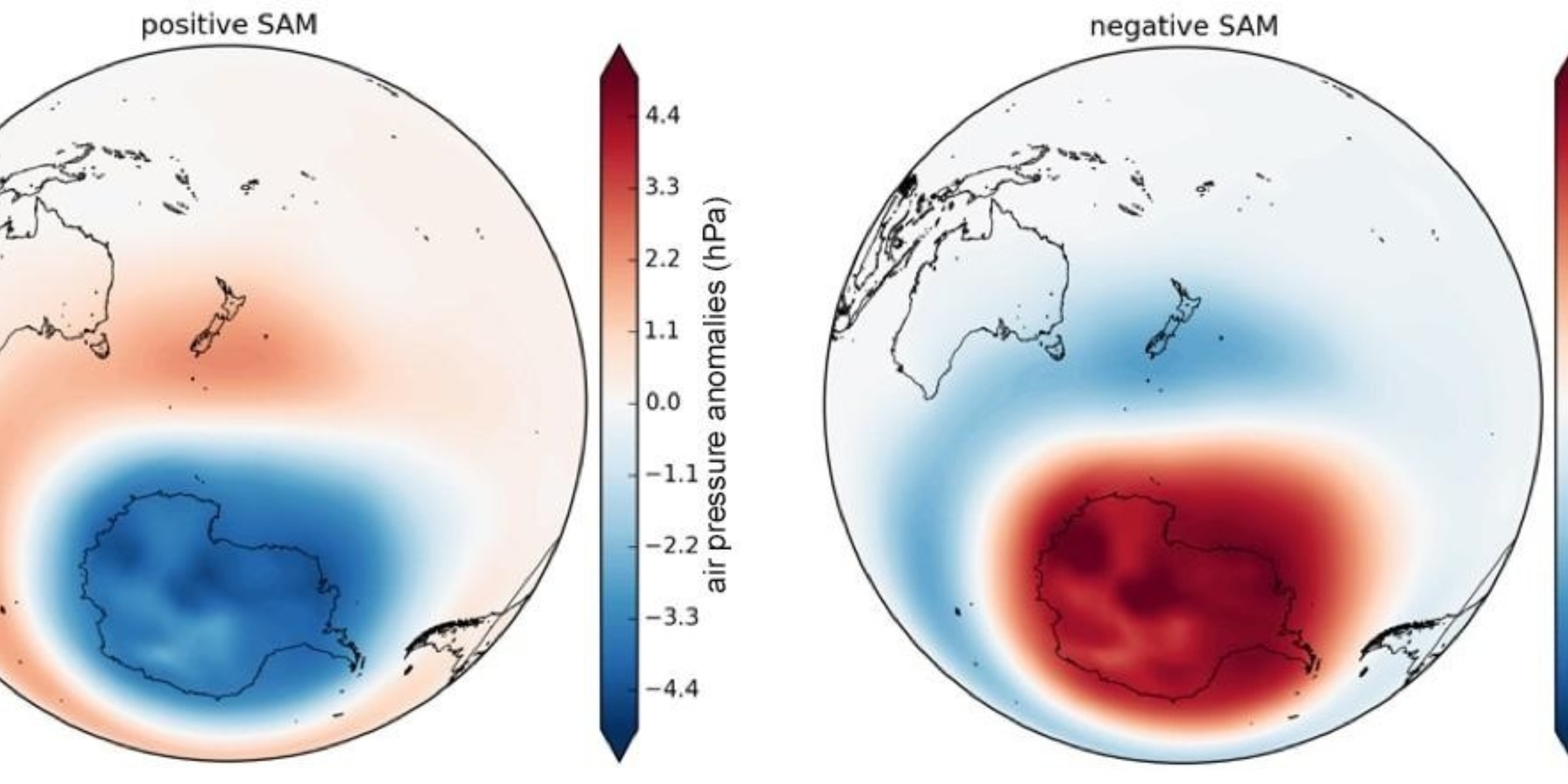 Projected reductions in sea ice cover in the coming decades may also reduce carbon uptake. Less sea ice means an increase in wind-driven mixing of the upper ocean, which could result in reduced carbon dioxide absorption. A decrease in the Southern Ocean’s ability to absorb carbon dioxide could lead to more warming worldwide by allowing more of the greenhouse gas to remain in the atmosphere.

A warming planet of course means ice loss from Antarctica, which is already contributing to sea level rise and has the potential to affect millions of people globally. Research[2]has found that between 1994 and 2017 Antarctic ice shelves lost an estimated 6.5 trillion tones of ice and the Antarctic ice sheet lost 2.5 trillion tonnes. Coupled with ice loss from the Greenland ice sheet and mountain glaciers around the world, sea level has risen by 35 mm over this period.

A core programme of work for the Antarctic Science Platform is to better understand the interactions between the ocean and the atmosphere and how these interactions may respond under warmer conditions.

Understanding the way in which Antarctica and the Southern Ocean are responding to increasing levels of greenhouse gases is fundamental to understanding how weather and ocean systems will change around New Zealand and the rest of the world. Crucially, Antarctic research will also help us to identify and understand the implications of reaching certain thresholds or ‘tipping points’ in the climate system where shifts to a new state are inevitable and potentially irreversible.

More positively, Antarctic research will play a critical role in identifying and communicating the impacts that we can avoid by nationally embracing and acting upon the recommendations of the Climate Change Commission.