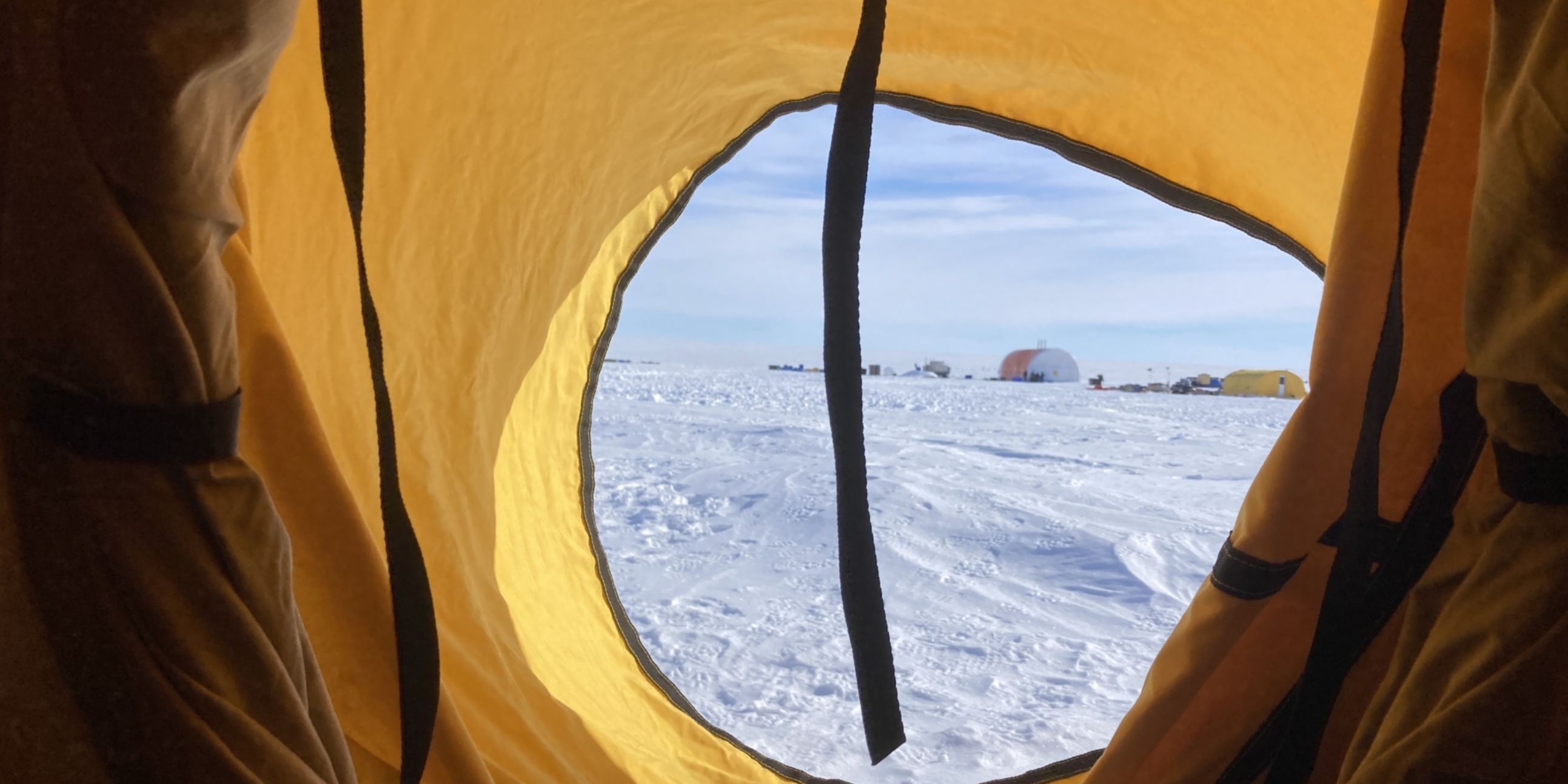 And they’re back! With lots of data

The science team is back from the Kamb Ice Stream (KIS) research camp on the Siple Coast, over 1000 km from Scott Base.

Led by Assoc Prof Huw Horgan (Te Herenga Waka—Victoria University of Wellington), the Antarctic Science Platform drilling project and its multi-disciplinary team have been investigating subglacial rivers. They drilled through hundreds of meters of ice sheet using a hot water drill system, and reached a river that flows into the ocean cavity under the Ross Ice Shelf.

The under-ice channel has now been surveyed, with the NIWA team recording the water column structure and its fascinating properties in the area where river meets ocean. The oceanography program culminated in the deployment of a string of moored ocean instruments, which will continue to relay data by satellite for several years to come.

The Icefin team from Cornell University used their underwater robot to collect sonar, video, and ocean data - with imagery revealing an environment teeming with life. The seafloor appeared to be strewn with boulders draped with sediment. Sediment cores collected from the seafloor promise to record the recent history of the channel.

Ice shelves are sensitive to changes in ocean and atmosphere temperature, but there is uncertainty about how and at what rate the Ross Ice Shelf will change as the planet warms. Future sediment coring at KIS will allow scientists to study past intervals of warming, when temperatures were like those projected for the coming decades.

This information will lead to a better understanding of how the Ross Ice Shelf and West Antarctic Ice Sheet responded to warmer temperatures in the past and improve projections of how they will respond to future warming.

Over the last month KIS Camp 2 hosted six drillers and 12 scientists conducting a number of oceanographic measurements, taking seafloor sediment and biological samples, ice and snow cores as well as completing remote surveys of the Kamb Ice Stream. The return Traverse team will now relocate the field camp from KIS Camp 2 to KIS Camp 3, as well as prove a new route to the Crary Ice Rise for work planned in 2023/24. 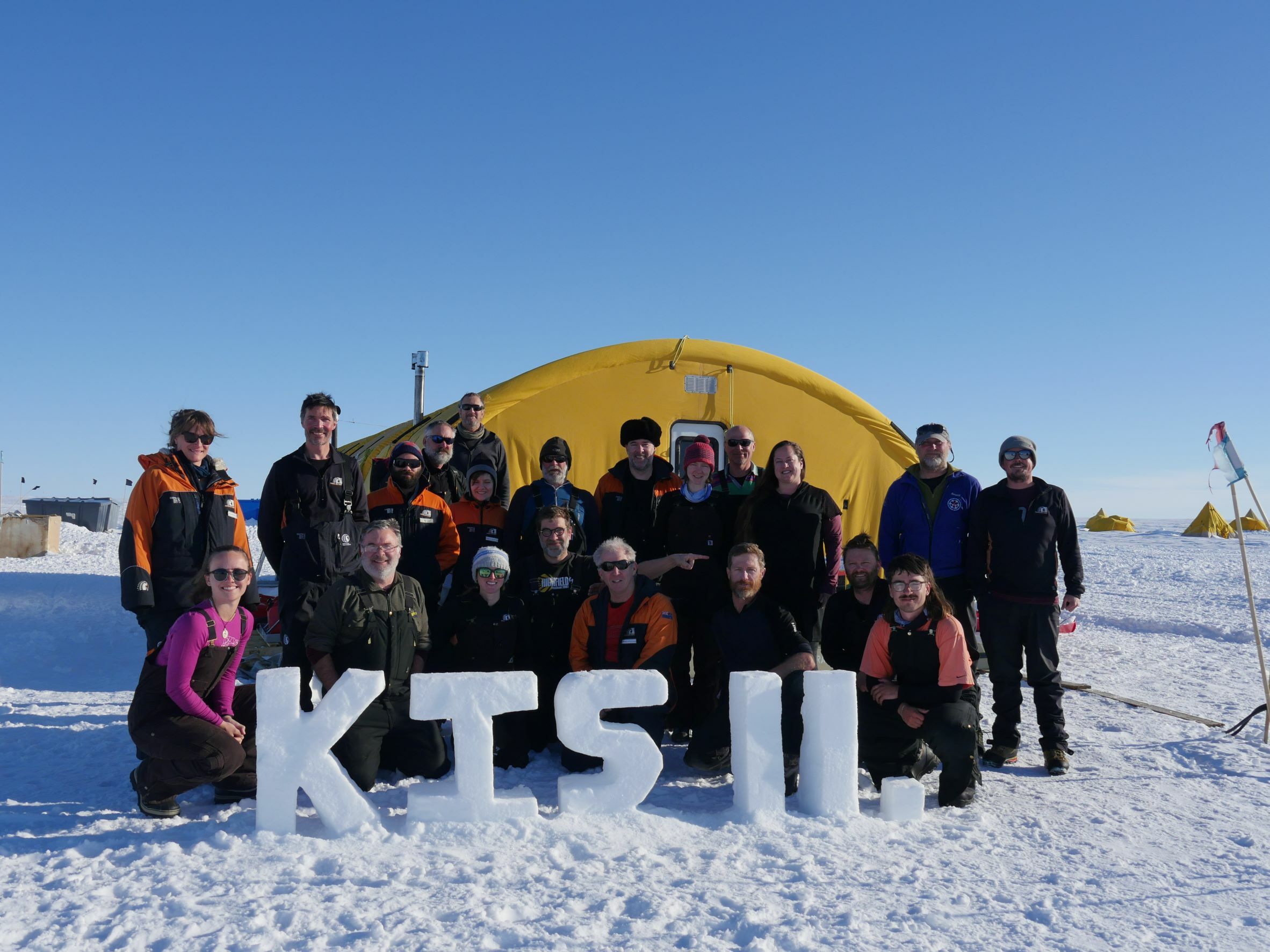 Some of the team at the KIS 2 drilling camp at Kamb Ice stream, over 1000km from Scott Base Photo: Ryan Wallace, 2022

Dr Natalie Robinson has returned from a six-week deployment with a team of physicists and biologists, where they tested an innovative sampling technique. The new drill system, designed by NIWA colleague Dr Craig Stewart, is the first of its kind to be used.

It works a bit like an apple corer, plunging into the ice without any spin, allowing platelet ice layers to be captured along with the water that fills the gaps between the ice crystals. This prevents the structure from collapsing and maintains the platelet layers, so that the algae, bacteria, and animals that are living between the platelets can collected along with their habitat.

“I am over the Moon with how our expedition went. The new technique worked even better than we hoped, producing great samples. It means that we can now study this ecosystem in a way that we haven’t been able to before,” Natalie said.

Among the teams still in the field are ecologist Prof Ian Hawes and Otago university student Tamara Pletzer, who are investigating how the aquatic microbial communities of the McMurdo Dry Valleys will respond to rising lake levels, fed by melting glaciers.

They are studying microbial mats at several inland lakes in the McMurdo Dry Valleys, including Lake Fryxell, Bonney and Brownworth, using a combination of remotely operated vehicle (ROV), underwater experimentation and sampling techniques.

The information and understanding gained from this research will help to develop strategies for management of human activities in the Valleys and for long-lasting protection of the area.

Radio New Zealand caught up with Ian at Scott Base in December, and you can listen to the interview about spending Christmas in the field, and about how how this research is carried out at the only time of the year when streams form and flow into the lakes.

New technology to measure supercooled ocean water under sea ice has been successfully tested in Antarctica this season. Led by Dr Inga Smith (University of Otago) and funded by the Marsden Fund, the project saw New Zealand, Norwegian and US scientists collaborate to build the High Precision Supercooling Measurement Instrument (HiPSMI) that can be sent below the ice on the Icefin (the small, remotely-operated submersible robot) to precisely measure exactly how cold the water gets. 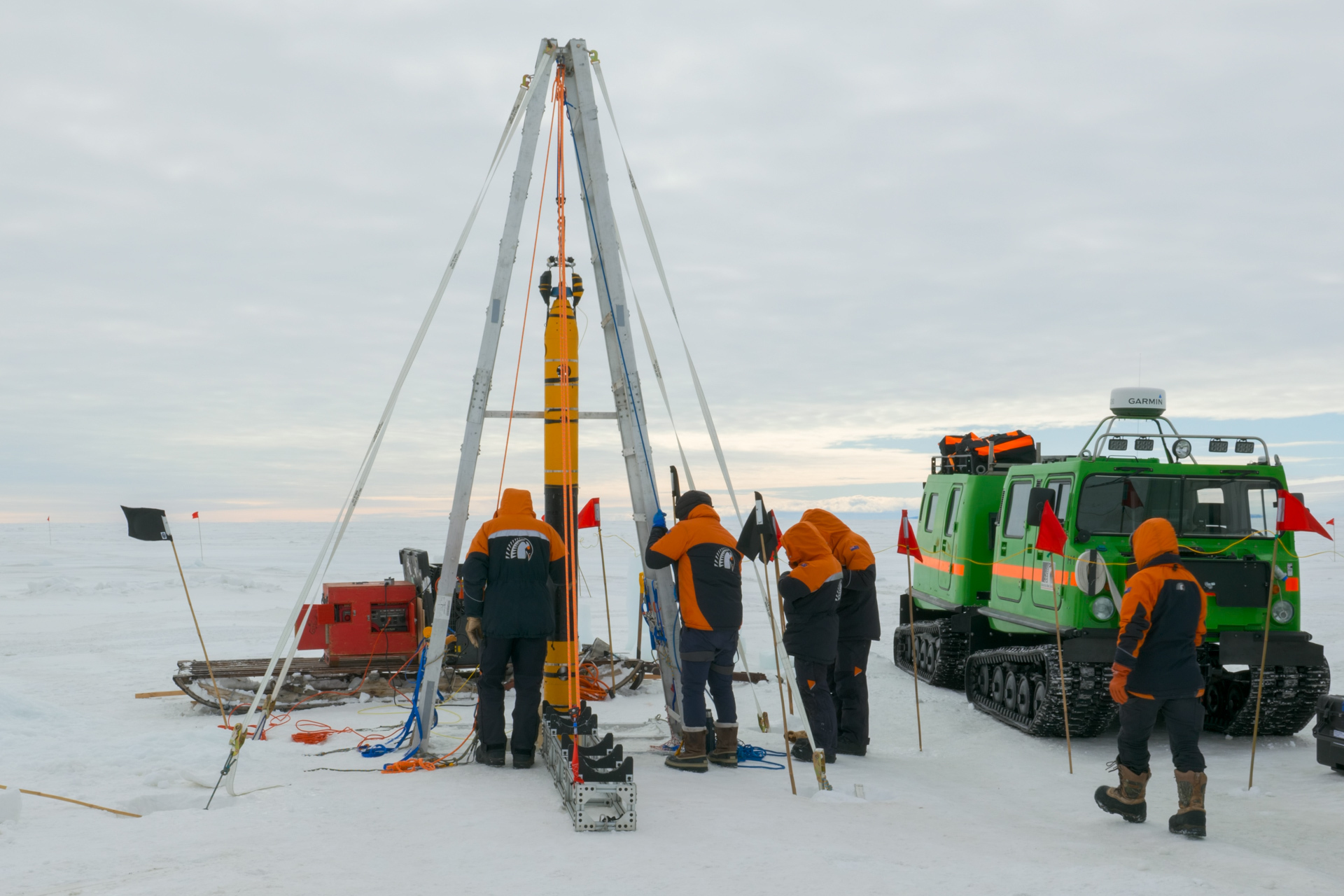 The goal of the fellowships is to increase the engagement of Early Career Researcher in INSTANT activities and to promote participation of scientists from regions currently under-represented in INSTANT, ie South America, Asia and Africa. Applications for SCAR fellowships should address the objectives and priority questions in INSTANT's Science and Implementation plan.

INSTANT fellowships are $US5000. Co-funding with other sources is encouraged. In this round, up to four fellowships will be funded.

A University of Otago-led study found evidence of a diverse community of microbes thriving in the cold, dark, low-energy environment beneath Antarctica’s Ross Ice Shelf, hundreds of kilometres from the open ocean. Learn more here.

Antarctica New Zealand has welcomed Jon Ager, the new Project Director for the Scott Base Redevelopment. Jon was previously the Director of the Antarctic Infrastructure Modernisation Programme at the British Antarctic Survey (BAS).

The Antarctic Research Directions and Priorities 2021-2030 was approved by Cabinet last month. It reaffirms Aotearoa New Zealand’s focus on impactful science that helps understand the role of Antarctica and the Southern Ocean in global systems, and recognises and reflects the value of mātauranga Māori. Priority areas for research are sea level rise, ice-ocean-atmosphere connections, ecosystem dynamics, and environmental protection.

Returning to a green Antarctica

Research fellow Dr Bella Duncan and illustrator Simone Giovanardi have produced a comic about paleoclimatology, and the insights from Antarctica’s past for future with CO2 and temperature scenarios. This collaboration began at the Drawing Science workshop, hosted by The Spinoff. A directory of illustrators who are eager to collaborate on science projects is available here, via the Science Media Centre. You can find the comic here.

Te Puna Pātiotio Antarctic Research Centre at Te Herenga Waka - Victoria University of Wellington is now seeking applications for a permanent role as an Antarctic Operations and Field Engineer. This role supports scientific infrastructure in sediment and ice coring and other scientific drilling programmes in Antarctica, New Zealand and overseas. The role will require participation in field programmes in Antarctica and New Zealand, with an emphasis towards the design, development, operation and maintenance of scientific drilling systems and associated equipment. Applications close Monday, 28 February 2022.