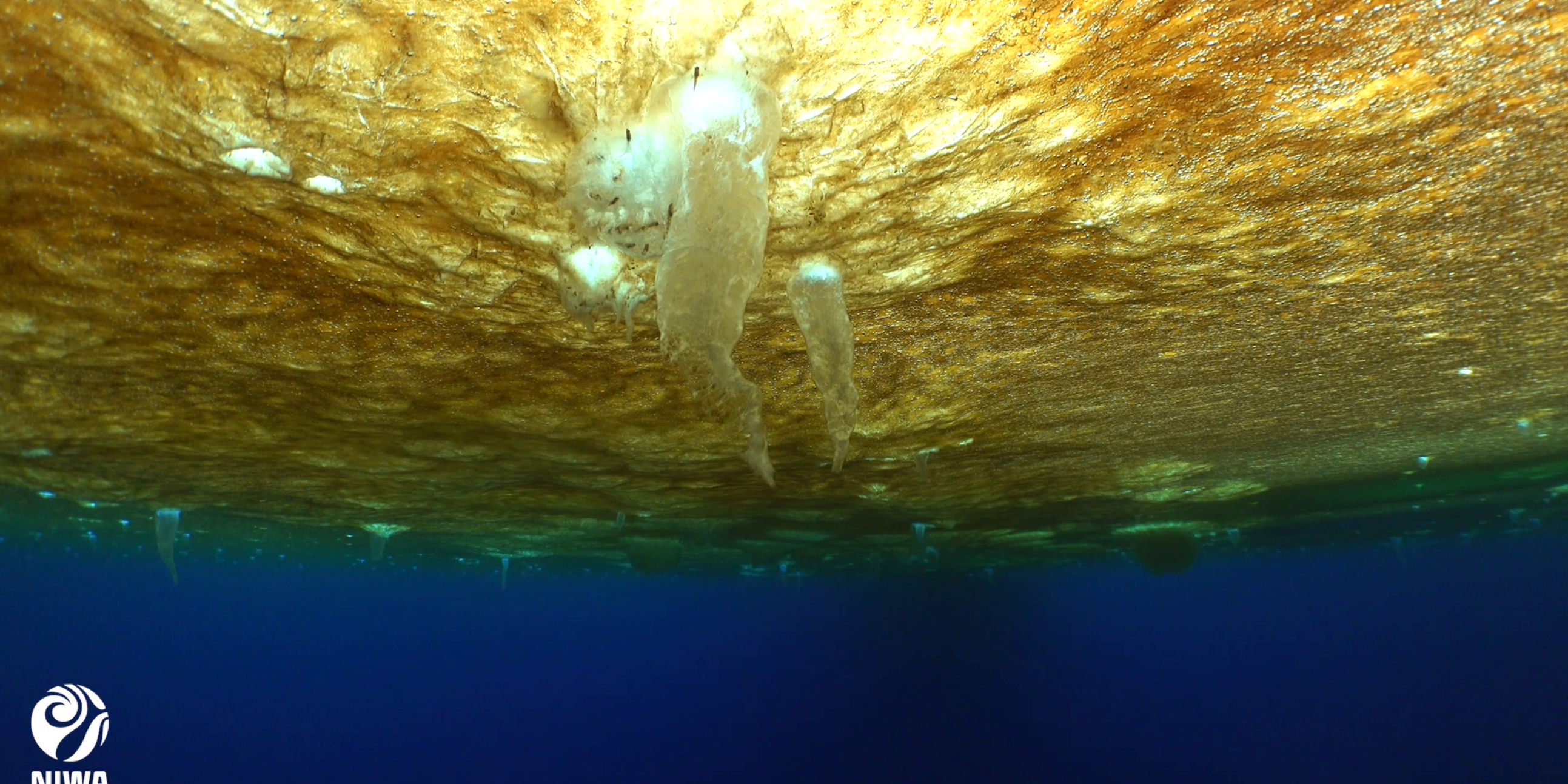 Undersea view of the sympagic environment under the sea ice. Photo: Leigh Tait/NIWA

Polar scientists often need to develop new technologies because there is, in general, less “off the shelf” technologies capable of working in extreme conditions and remote locations. One of the Antarctic Science Platform’s goals is to support innovation and create new ways of collecting data. This week our website features new information about two such projects.

The sympagic community sampler is a top-down coring and sampling system designed to study platelet ice, a floating layer of ice crystals that forms in supercooled water below sea ice. Platelet ice creates a unique habitat and protective environment for algae and bacteria, and offers a sheltered nursery for Antarctic fish eggs and hatchlings.

Platelet ice is fragile, and potentially vulnerable to small shifts in the climate. Losing the ice could devastate Ross Sea marine ecosystems.

The new sampling technique keeps platelet ice layers intact, along with the water and biology that fills the gaps between the ice crystals. This approach maintains the biological profile of the platelet layers, so that the algae, bacteria, crustacea and fish that are living between the platelets can be studied in their habitat. 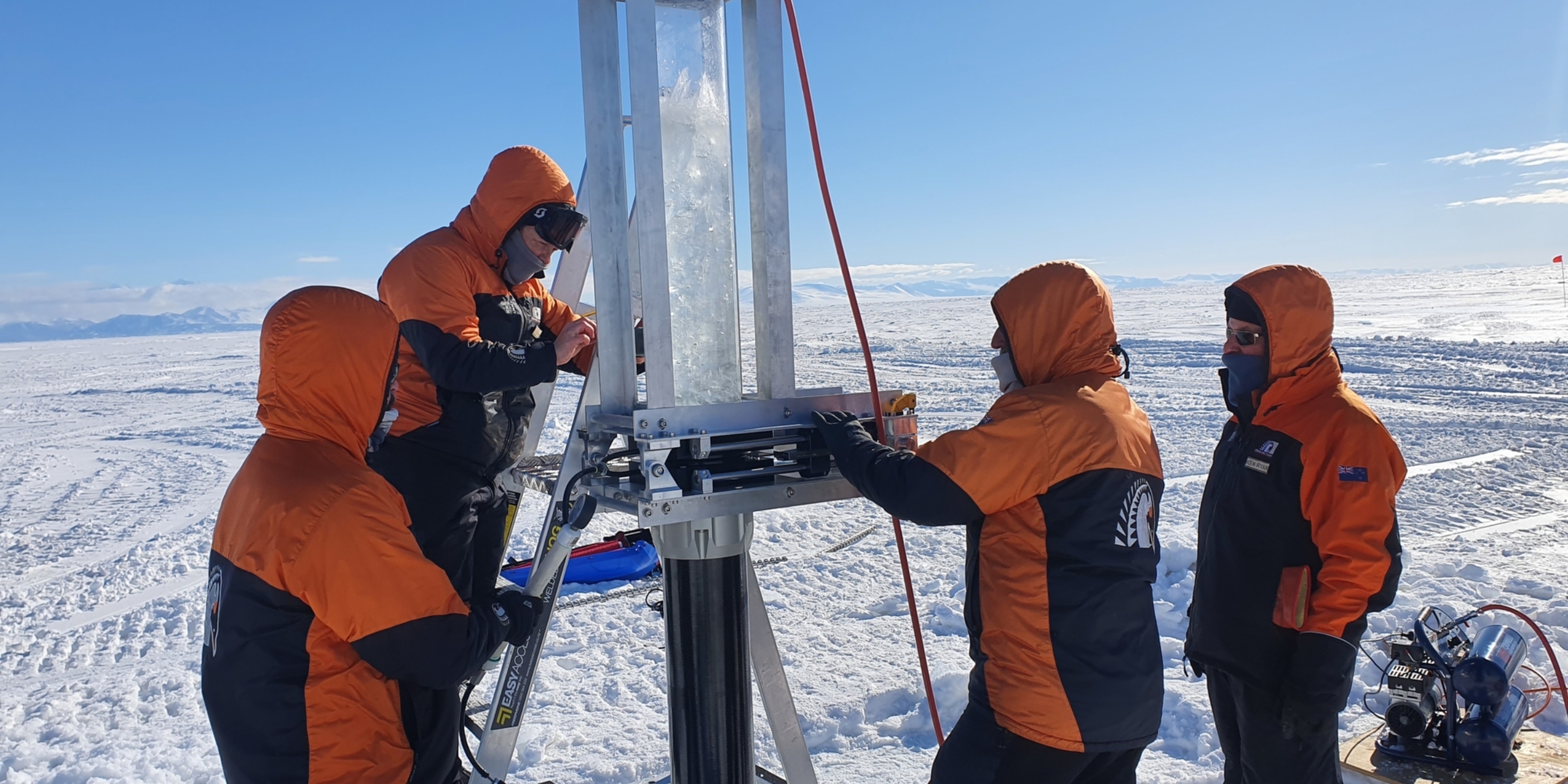 An underwater machine that never sleeps

Given that icy habitats are inaccessible by humans for much of the year, another innovation aims to find out what’s happening under the ice when no one is looking.

The HAUWAI-20 (which is short for High-capacity Autonomous Under Water sampler for Antarctica 2020) is the first instrument of its kind, ever produced or custom-made for New Zealand and Antarctica.

The autonomous underwater biosampler is moored in the ocean, under the sea ice, year-round.

It is equipped with a programmable controller and in line sensors which mean it can sample when certain combinations of environmental conditions are met (or it ‘sees’ something interesting).

Understanding present-day marine ecosystems will help us forecast the likely future impacts of climate and environmental change on Antarctic ecosystems.

The Ross Sea Region includes the world’s largest marine protected area, and it is home to a wide range of organisms - from tiny algae and bacteria to larger animals, such as krill and silver fish, all the way to whales, the largest of all. These organisms are interconnected within a food web and rely on each other for survival. 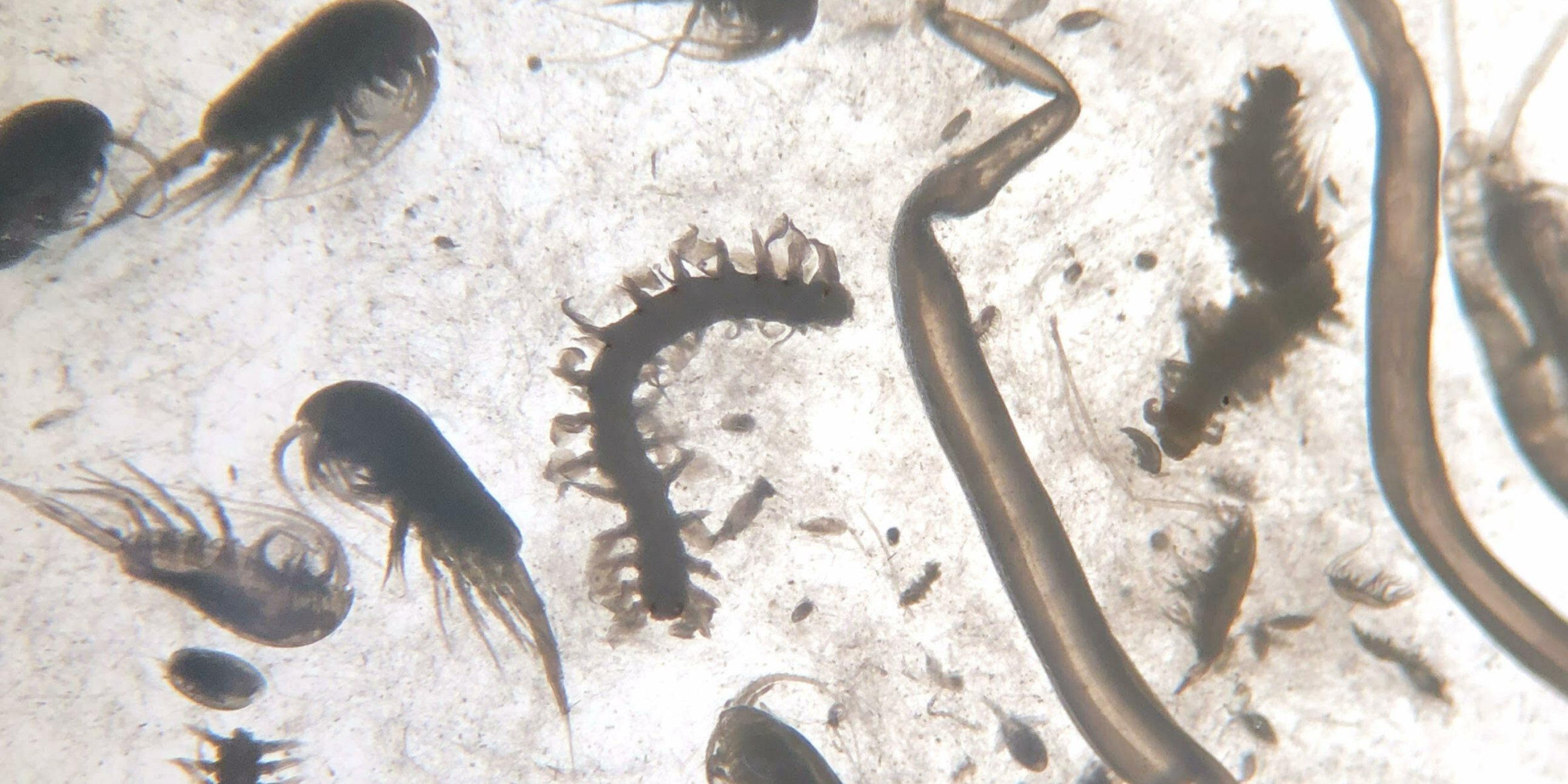 Examples of zooplankton collected from an Antarctic sympagic environment viewed down a microscope. Photo: Craig Cary/University of Waikato

Ice shelves are a ‘safety band’ around Antarctica, holding back the ice sheet and limiting how much it can contribute to sea level rise.

The Ross Ice Shelf currently appears stable, with low average melt rates. But remote sensing observations show that, at a particular spot near Cape Crozier, the underside of the shelf’s edge is melting at a faster rate.

To monitor the situation, this season saw the successful deployment of a network of Radar Echo Sounders (ApRES). These instruments will monitor seasonal variability in ice shelf basal melt rates for two summer seasons. This work, supported by the Marsden Fund and the Antarctic Science Platform, is the essential first step to live monitoring of daily melt rates, so scientists can ‘see’ what is happening all the time.

They did it! Ross Ice Shelf GPS units are go

If inventing technology for Antarctica is a challenge, installing it can be too. The seasonal window for placement can be narrow, the weather needs to cooperate.

This season, everything came together for the team studying the seasonal flow of the Ross Ice Shelf. Since the 2019/2020 season, they’ve been looking to install GPS units on the fastest flowing parts of the shelf. Two units were placed, but then conditions conspired against them in subsequent years.

Congratulations to the team - four additional GPS receivers are now in place, extending the spatial coverage of the network.

These field measurements will be combined with satellite data to guide computer simulations that will make predictions of the response of the Ross Ice Shelf, and West Antarctic Ice Sheet to climate change.

The image below was taken from video recorded at 10.2m depth in Lake Bonney, a 40m deep, ice-covered lake in the Taylor valley, using a Chasing M2 underwater drone. The small drone was able to penetrate small gaps around the edges of the 4m thick lake ice, and was used to map the microbial communities on the lake floor.

The two red dots are from parallel laser beams, 10cm apart, that provide a scale for measuring size. Benthic communities (animals and plants at the bottom of a water body) in Antarctic lakes are entirely microbial, and at shallower depths dominated by photosynthetic cyanobacteria, which form three-dimensional structures of a size and complexity not seen anywhere else on earth.

This work is part of a wider research programme aimed at developing an understanding of the resilience of inland aquatic ecosystems to the types of stresses that are anticipated to accompany ongoing climate change. At present the levels of these lakes are rising as more meltwater enters - Lake Bonney rose by 30cm this summer - and a key question is the extent to which these unique microbial structures can persist. 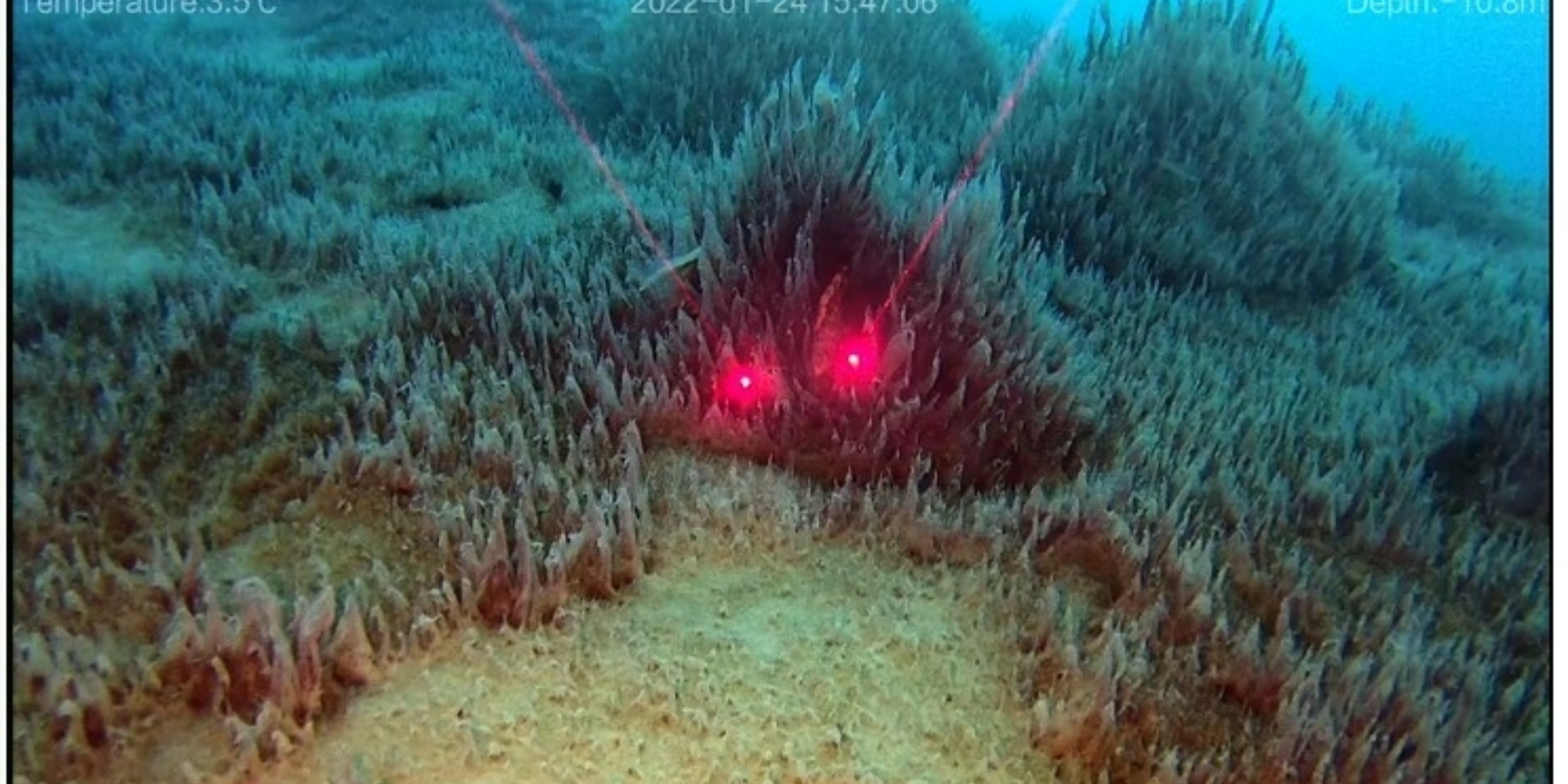 At the bottom of Lake Bonney, Dry Valleys

Record-breaking heatwaves hit both Antarctica and the Arctic simultaneously last week, with temperatures reaching 47℃ and 30℃ higher than normal.

Professor Tim Naish, who leads our Ocean-Ice-Atmosphere research programme, gave an extended interview with TVNZ’s Q+A programme. (You can watch it here.)

“It’s pretty clear this is an extreme atmospheric event. It’s a source of moisture that’s come from South Australia, and ultimately from the subtropics, in what we call an atmospheric river. We’ve had this plume of warm, moist air come south and penetrate well into east Antarctica – one of the coldest places on earth.

While reluctant to attribute the recent high temperatures directly to climate change, he says they could be “the canary in the coalmine of things to come".

In this interview with Radio New Zealand, Dr Kyle Clem explained what an atmospheric river is, and how such events might affect different parts Antarctica.

NIWA is taking applications for spaces on the RV Tangaroa beyond 2022/23. All applications submitted must be pre-approved by the Chief Scientist of the applicant’s organisation. Application details can be found here, or contact Rob Christie in the first instance to discuss your plans.

Journal of the Royal Society of New Zealand call for papers

The Journal of the Royal Society of New Zealand is calling for papers for a 2023 Special Issue entitled 'New Zealand and Antarctica in a changing climate: current state, possible impacts and effective response'. Submissions should be made by 8 April 2022, and should include a preliminary title, list of potential authors and a short descriptive paragraph outlining the scope of your proposed manuscript. Full details can be found here.

In case you missed it: Antarctic science in the news

Antarctic Update Assoc Prof and Principal Scientist (NIWA) Craig Stevens is just back from another trip to the Ross Ice Shelf - discovering an under-ice river and some unexpected marine life. RNZ Nights, 18m59s

IPCC report: this decade is critical for adapting to inevitable climate change impacts and rising costs Climate change impacts in Aotearoa New Zealand are real and future risks are high, according to the latest report released today by Intergovernmental Panel on Climate Change (IPCC). The report is part of the IPCC’s Sixth Assessment and focuses on impacts, adaptation and vulnerability to climate change. It highlights that some impacts such as sea-level rise are now unavoidable in the near-term, irrespective of the emissions trajectory, and will require new, larger-scale and timely adaptation efforts. The Conversation

'We must act now' — Māori researchers call for action on major climate report Māori researchers are hoping Covid-19 and the Ukrainian invasion will not overshadow the gravity of the climate crisis as an international assessment report is released. … “You can see how quickly the world can react and find money in terms of the COVID pandemic. We don’t seem to have the same rapid response when it comes to climate change and yet this is what Māori have been talking about for years, Waikato University Assoc Prof Sandy Morrison says. Stuff

Antarctic sea ice hits lowest record Natural variability is probably the cause, although global warming could have a role. Antarctic sea ice shrank to below 2 million square kilometres this year, the lowest minimum extent since satellite records began 43 years ago. Nature

Satellite data shows entire Conger ice shelf has collapsed Nasa scientist says complete collapse of ice shelf as big as Rome during unusually high temperatures is ‘sign of what might be coming’. The Guardian

The Discovery of the Endurance is a pivotal moment The main goal was to uncover the shipwreck. A lot of important science was done along the way. The multinational team broke records and the information collected about weather forecasting, ice coverage, and even ship engineering is invaluable to future exploration in the Southern Ocean. The Nerdist

From Antarctica to New Zealand - the image below is Moeka o Tūawe (Fox Glacier) captured by Jonathan Kay. Cryosphere is a photographic exhibition that owes its origins to a 2018 explorative project entitled Ice Field. The project surveyed two Te Waipounamu (South Island) glaciers; Haupapa (Tasman) and Te Moeka o Tūawe (Fox), which capture the wide spectrum of glaciers scattered throughout Aotearoa. The exhibition runs until 23 April at the Jhana Millers Gallery, and you can view the artworks here. 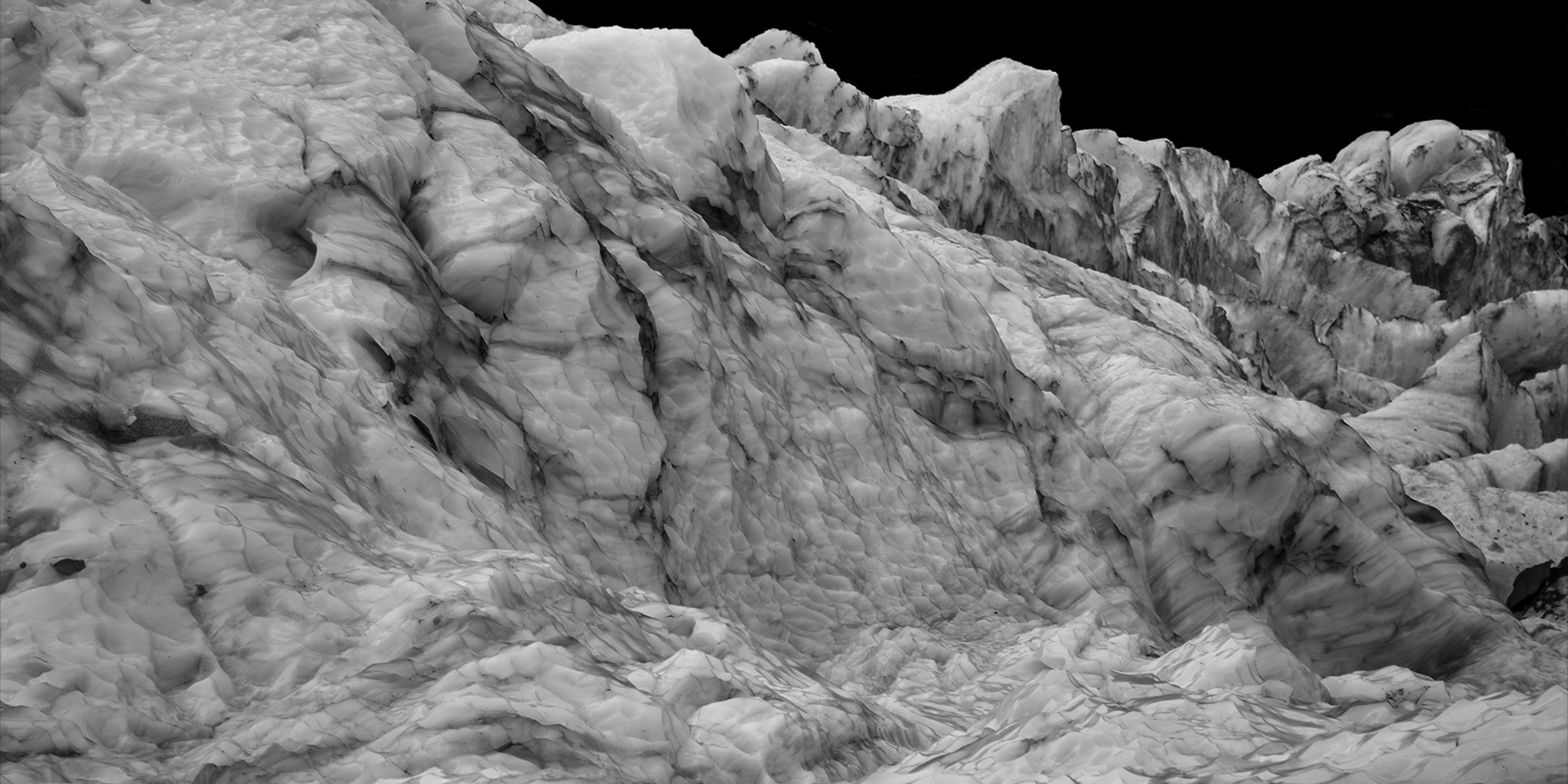